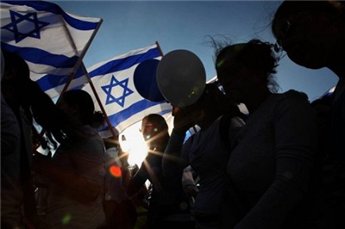 The annual poll of the Israeli Democratic Institute showed that 33% of Israeli Jews do not agree that Palestinian Arabs with Israeli identity cards should not have equal rights with Jews, claiming that Arabs are not Israelis, according to the Israeli Hebrew version of Maariv newspaper on Sunday.The paper reported on Sunday that the results of the poll were given to the Israel President, Shimon Peres. The Institute conducts such polls annually to show Israeli opinions in different areas of life in Israel.

The poll was supervised by Prof. Mina Zemoch, and was conducted in March of this year. In a second round of polling, many questions of the poll were asked again in the current month of September, with the idea that opinions may have changed due to the current Palestinian bid for statehood at the United Nations.

77.9% of Jews inside Israel say that Arabs inside Israel should not be allowed to participate in the crucial, political, economic and even social decisions in Israel, according to the poll.

The Israeli President, Shimon Peres, expressed his satisfaction regarding the results of the poll, which said that 82% of Israeli Jews polled said they would like to stay in Israel their whole lives. Peres responded to recent protests about housing prices, saying that housing should be guaranteed by the government.

Moreover, he called for changes regarding Israel’s relation with its Arab population, to overcome the prejudice expressed in the poll by the one-third of Israeli Jews polled who said that Israeli Arabs should not have equal rights with Jews.