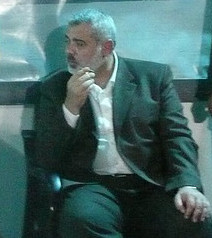 In response to the speech given by Israeli Prime Minister Binyamin Netanyahu on Friday at the United Nations, Palestinian Prime Minister in the Gaza Strip, Ismail Haniyeh (of the Hamas party), stated that Netanyahu’s speech was arrogant and misguided, and his defense of the four-year long Israeli siege on the Gaza Strip was criminal.Haniyeh, in his statement Sunday, criticized Netanyahu’s characterization of Gaza, and the Hamas party, as being under the control of Iran — an accusation that Haniyeh explicitly denied.

The Hamas leader also challenged the tone of Netanyahu’s speech, which he said was ‘a desperate attempt to transform the historical occupier into the victim’. In his speech Friday, Netanyahu did compare Palestinian policies to those of the Nazis in the Holocaust, who killed six million Jews and other minorities in Europe during World War II.

During his speech, Netanyahu said that he sought advice from the Lubavitcher Rebbe, Menachem Mendel Schneerson, when Netanyahu was appointed Ambassador to the UN in 1984. Schneerson has a long history of racism against non-Jews, having written, among other things, ‘Two contrary types of soul exist, a non-Jewish soul comes from three satanic spheres, while the Jewish soul stems from holiness’, and ‘a non-Jew should be punished with death if he kills an embryo, while a Jew, whose existence is most important, should not be punished with death because of something subsidiary.’ In his speech at the United Nations Friday, Netanyahu called Schneerson ‘great’, and said he had been influenced by the Rabbi.

Netanyahu also accused Iran of involvement in the election of Hamas in the Palestinian Territories, in an internationally observed election that was deemed free and fair. The Israeli Prime Minister did not mention the election in his speech, instead saying Iran had ‘through its proxy Hamas promptly kicked out the Palestinian Authority’ in Gaza.

Haniyeh responded that the Israeli Prime Minister’s ‘lies’ would only serve to turn more of the world community toward the Palestinian cause.