Two Children, Ages 8 and 10, Kidnapped By Israeli Soldiers In Jerusalem 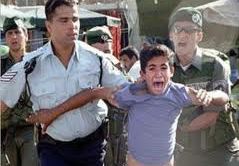 Furthermore, soldiers broke into and searched several homes in the neighborhood, and used them as army posts and monitoring towers.

Abdul-Karim Abu Sneina, spokesperson of the Popular Committee to Defend Silwan, called on all national institutions and popular committees to hold a protest in front of the Israeli Central Court in Jerusalem, on Tuesday, to protest a decision by the Jerusalem Municipality to demolish homes in the neighborhood, in preparation to remove the whole Arab neighborhood and to build Jewish-only settlements.

Abu Sneina added that the current changes in the region, and the international political developments, are giving the Jerusalem Municipality the feeling that it has the opportunity to demolish part of the Al Bustan at the current stage, so it can remove the whole neighborhood in later stages.