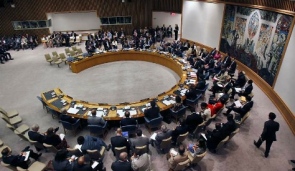 Security Council’s five permanent members split over PA’s request, so consultations are not expected to lead to a formal vote anytime in the near future, UN sources say.
UN Security Council members will convene on Monday for informal consultations on the Palestinian Authority’s application for admission to the United Nations as a full member state.

Under UN rules, a new member state can be admitted only on the Security Council’s recommendation. If the council recommends acceptance, the General Assembly must then vote on whether to ratify the decision.

Currently, the council’s five permanent members are split over the PA’s request, so the consultations are not expected to lead to a formal vote anytime in the near future, UN sources said.

‘It’s highly likely that the consultations will continue for some weeks,’ said the deputy head of one Western mission to the United Nations. ‘The Palestinian application is considered an extremely sensitive issue, and in particular, it’s a source of controversy between the council’s two leading powers, the United States and Russia. Therefore, no quick decision that would produce an official debate and vote is expected.’

However, the diplomat added, the rules allow an unofficial consultation to be declared official on the spot and without warning, albeit this happens only rarely.

The pace of the informal consultations and the timing of the meetings is generally dictated by the council’s five permanent members. Because these five have veto power over resolutions, the council would usually prefer to find a formula they can all live with, if that is possible, rather than proceeding immediately to a vote in which one of the five is certain to cast a veto.

However, this process can result in substantial delays. As an example, officials in New York cited the fate of a draft resolution proposing sanctions on Syria that France submitted six weeks ago. Due to Russia’s opposition, the council has yet to hold a single official debate on the matter – a situation French Foreign Minister Alain Juppe recently described as scandalous.

Informal consultations are always held behind closed doors, and no one except the council members’ official representatives are allowed to attend. Nothing said in such a consultation is binding.