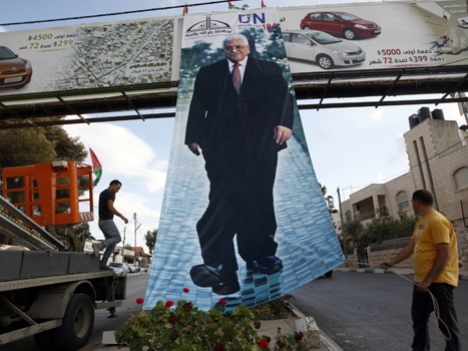 Thousands gather in Ramallah as Palestinian President returns from New York; Abbas expected to convene top ministers to discuss the Quartet’s proposal for renewing peace talks.Thousands of Palestinians cheering and waving flags gave President Mahmoud Abbas a hero’s welcome in the West Bank Sunday, as he told them triumphantly a ‘Palestinian Spring’ had been born following his historic speech to the UN last week.

Abbas’ popularity has skyrocketed since he asked the UN on Friday to recognize Palestinian independence, defying appeals from Israel and the United States to return to peace talks. His request has pushed the region into uncharted waters, and left the international community scrambling over how to respond.

Thousands of people crowded Abbas’ West Bank headquarters in the city of Ramallah to get a glimpse of the 76-year-old president upon his return from New York. Abbas was uncharacteristically animated, shaking his hands and waving to the audience.

Abbas compared his campaign to the Arab Spring, the mass
demonstrations sweeping the Arab world in hopes of freedom, saying that an independent Palestinian state is inevitable.

‘We have told the world that there is the Arab Spring, but the Palestinian Spring has been born,’ he said. ‘A popular spring, a populist spring, a spring of peaceful struggle that will reach its goal.’

He warned that the Palestinians face a ‘long path’ ahead. ‘There are those who would put out obstacles … but with your presence they will fall and we will reach our end.’

Later on Sunday, Abbas was expected to convene his top ministers and advisers to discuss the Quartet’s proposal.

The Palestinians want an independent state in the West Bank, east Jerusalem and the Gaza Strip, territories captured by Israel in the 1967 Mideast war.

Israel says it’s ready for peace talks, but has rejected Palestinian calls to freeze construction of Jewish settlements in lands claimed by the Palestinians. Israeli Prime Minister Benjamin Netanyahu has also rejected Palestinian demands that the borders between Israel and a future Palestine be based on the 1967 pre-war lines.

Abbas last week asked the UN Security Council to grant the Palestinians full UN membership. The Security Council is expected to study the request for several weeks before making a decision, though the U.S., Israel’s closest ally, has promised to veto the request if it proceeds.

As an alternative, the Palestinians say they will seek lesser observer status in the General Assembly – short of full statehood but a position that would allow them to join international bodies where they could push their agenda against Israel.

The international Quartet of Mideast mediators – the U.S., EU, Russia and the UN – last week issued a statement calling for a resumption of peace talks without preconditions and a target for a final agreement by the end of 2012. Abbas has signaled he will reject the Quartet’s plan, while Israel has hinted it accepts it.