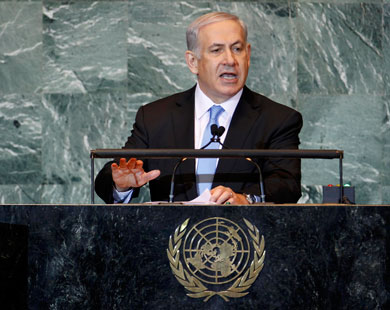 Israeli Prime Minister, Benjamin Netanyahu, called on the Palestinian President, Mahmoud Abbas, for a resumption of peace talks without any pre-conditions in order to achieve peace. “Palestinians want an independent state but they have to give peace first. What they are trying to achieve is that they have gone to the UN asking for statehood without giving peace to Israelis, Netanyahu said, adding that “This is wrong, and it is not expected to succeed.”

He stated that he discussed the unconditional peace talks with Abbas outside the UN General Assembly last week, adding “I told Abbas, look! We are in the same city, at the same building of the UN, let us set and discuss peace talks.”

“If you (Abbas) want to achieve peace, you must abandon your all pre-conditions.”

Netanyahu’s comments came after the Palestinian President, Abbas, returned back to the West Bank city of Ramallah in which thousands of Palestinians welcomed him after he officially has submitted his bid for full membership at the UN.

Abbas told crowds on Sunday that the Palestinians won’t re-start peace talks unless Israel freezes all settlements’ activities and violations in the Palestinian Territories.

On Friday, the Quartet (the US, EU, Russia and the UN) suggested should Palestinians and Israeli re-start negotiations to achieve a final agreement by the end of 2012.

The US-brokered Palestinian-Israeli peace talks have been halted as the Israeli Prime Minister, Netanyahu, refused to extend the ten-month Israeli settlements activity freeze on lands of the Palestinian Occupied West Bank.

On Monday, the UN Security Council is expected to hold informal meeting to discuss consultations regarding the Palestinian’s application for statehood and full membership at the international body.