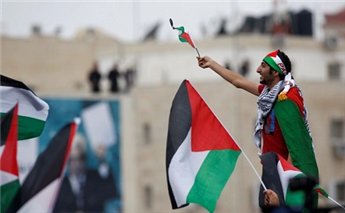 Head of Fatah Movement’s delegate for the national unity, Azzam Al-Ahmad, declared that he would hold a meeting with Hamas in Cairo next month to implement the Palestinian national reconciliation, stating that connections are continued regarding the unity and it would include wider political issues, the Maan News Agency reported Monday.Al-Ahmad said that the Palestinian President, Mahmoud Abbas, announced to discuss the Palestinian unity right after returning back to the West Bank city of Ramallah, pointing out that Hamas’ objection over organizing pro-Palestinian bid activities won’t affect the national unity.

Erekat called on the Quartet members to recognize the Palestinian state as soon as possible to rescue peace process in the Middle East.

“Until this moment, there is no partner in the Israeli government that wants to achieve peace. However, the Israeli government completely wants to impose its position,” said Erekat, confirming that “The Palestinian leadership position is resuming peace talks in accordance with clear reference based on 1967 borders and totally freezing of Israel settlement activities.”

He added regarding the Israeli government statements,calling for dissolving the Palestinian Authority that the P.A is not a tool in the hand of Netanyahu to do whatever he wishes to. P.A is a tool to transfer to a Palestinian state, he stated.

The Palestinian spokesman, Dr. Ghassan Al-Khateeb, denied any Israeli assistance for the Palestinian side, considering the Israeli Finance minister statements’ beguilement and misinformation.

The Israeli minister, Yuval Steinitz, threatened to cut the Israeli assistance to Palestinians, and considering the Palestinian leadership an enemy entity if the P.A rejects all suggested solutions and recognizing the Jewish State.

He said he would hold a meeting with the Gabon and Nigerian Foreign Affairs ministers to urge them to vote in favor of the Palestinian application at the UN. Almaliki further would hold a meeting with the Columbian minister of Foreign Affairs to ask her to support the Palestinian bid at the UN particularly that Columbia did not take its decision regarding voting for the bid or against.

Dr. Almaliki expects that consultations to be convened at the UN Security Council based on the request of the United States that wishes to recognize other members’ positions regarding the Palestinian application.

In addition, Almaliki said that he would hold a meeting with Lebanon’s ambassador to the UN, head the current session of the UN Security Council, to discuss the consultations of the Security Council session to make the necessary steps for any decision that the body would take.

Countries such as Malaysia and Turkey will be working hard to change Bosnia and Herzegovina’s positions and voting in favor of the Palestinian bid, Almaliki said.