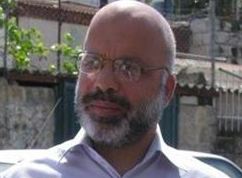 Detained legislator Ahmad Attoun, of Jerusalem, rejected an Israeli Court offer of expulsion from Jerusalem in exchange for his release. He also refused to sign a document stating that he will not return to the city.Attorney Fadi Al Qawasmi, one of the defense lawyers in Attoun’s case, stated that the Israeli Prosecution demanded extending the detention of Attoun until all legal procedures are concluded, according to the Safa News Agency. The Israeli Prosecution claims that Attoun, a resident of Jerusalem, “illegally entered Israel.’

Al Qawasmi added that after listening to defense and prosecution arguments, the Israeli court decided to release Attoun and ordered a NIS 50.000 bail.

The court also ruled that Attoun must sign an affidavit stating that he will not enter Jerusalem without an Israeli permit, or until the High Court rules that he is allowed into the city. He rejected this condition because he is from Jerusalem and insists on his legal right to be there.

Attoun was kidnapped by undercover forces of the Israeli army last week. He was near the protest tent in the proximity of the Red Cross in Jerusalem, where several legislators and elected Palestinian officials from Jerusalem are protesting Israeli orders of expulsion from their city.