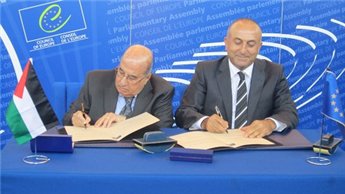 The Secretary-General of the Palestinian Legislative Council, Ibrahim Khreisheh, stated that the Parliament Association of the European Council overwhelmingly approved an action calling for European members of the Security Council to support the application by Palestinian President Mahmoud Abbas for full U.N. membership for Palestine, the Ma’an News Agency reported.. In his application, Abbas requested European Security Council members–Britain, France, Germany, Portugal, Russia, and Bosnia and Herzegovina– to vote for and recognize the state of Palestine.

Khreisheh, who is also a member of the Fatah Revolutionary Council, emphasized that this move puts pressure on the international community to act for the benefit of Palestine and the legitimate Palestinian rights.

On October 5, head of the Palestinian National Council, Salim Za’noun, spoke to the European Council in Strasbourg. He stated, ”We Palestinians and Europeans share the same values and principles. We have tried very hard, since the establishment of the Palestine Liberation Organization and the emergence of the Palestinian National Authority, to implement these principles. In addition, we have participated in several European foundations and associations, along with European daily interaction with our people during the free presidential and legislative elections in the years 1996, 2005 and 2006.’

‘We believe in the principles and values of democracy and humanity, because these principles are inherent in our people and this is what we most want for our people,’ Za’noun added. ‘The Palestinian people seek an independent Palestine in the future based on principles of justice, democracy, human rights, full equality between men and women, and equal opportunities without any discrimination based on race, religion, or sex. This is in addition to establishment of public freedom and guarantee of freedom of religion and beliefs, for these principles may strengthen our friendship and partnership with Europe, enhancing neighborly relations between us as we share history and geography. ‘

He also stated; “We Palestinians are making every possible effort to overcome the obstacles that hinder the work of our democratic institutions, including obstacles caused by the military occupation. The occupation is holding in its jails dozens of elected representatives from various parliamentary blocks, including Jerusalem legislators who are being banished from their city. We want the release and freedom of the six thousand Palestinian detainees held by Israel, just as we want the release of Israeli corporal Gilad Shalit.’