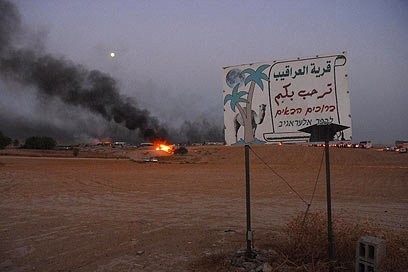 Dozens of Israeli policemen and members of the so-called “Israel Land Authority” demolished and removed all tents and structures in Al Araqeeb village in the Negev., the thirtieth such attack against the village. Residents of all Arab villages in the area declared a strike and massive demonstration on Thursday morning at 11 at a protest tent set up to counter an Israeli plan to expropriate nearly 860.000 dunums (212510.6 acres) of Arab lands and displace nearly 30000 Arabs living in the “unreacognized” villages in the Negev.

The protest will be held at the so-called “Markaz Ha-Nege,” the Negev Center, west of the Soroka Hospital in Be’er Al Sabe’ (Bir Shiva). The Higher ‘follow-up’ Committee in the Negev called on all residents to participate in the strike.

The Committee stated that the residents will be protesting the so-called Bravar Israeli Plan aimed at taking all Arab lands in the Negev in order to build Israeli settlements and shopping malls.

The plan calls for annexing more than 700.000 dunums (185329 acres) and displacing the residents by demolishing 14 villages in the area.

All unrecognized villages in the Negev are under continuing Israeli attacks and violations, as Tel Aviv does not recognize the residents’ right to live on their land–land they inhabited long before the 1948 creation of the state of Israel in historic Palestine.