Miles Of Smiles 6 Arrives In Gaza 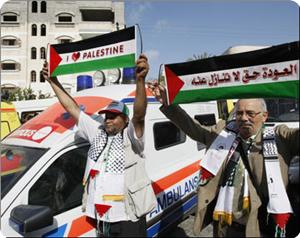 The Miles of Smiles convoy arrived in the Gaza Strip late on Wednesday through the Rafah Border Terminal in the southern part of the Gaza Strip, and received popular and official welcome ceremonies. Security sources at the Rafah Terminal stated that 41 human rights activists managed to cross into the Gaza Strip after completing all necessary coordination procedures with the Egyptian Authorities. The remaining activists will be allowed into Gaza soon.

The convoy carries 10 tons of medical supplies, including medications that have been unobtainable in Gaza, and a number of ambulances.

Dr. Younis Al-Astal, member of the Hamas parliamentary bloc, welcomed the activists and acknowledged their relentless efforts to enter Gaza and deliver the humanitarian supplies.

Convoy members said that trips to deliver medical and humanitarian supplies will continue until the illegal Israeli siege is fully lifted without any preconditions.

The Miles of Smiles 5 and the Africa 1 solidarity convoys managed to enter the Gaza Strip on Monday evening, August 30, via the Rafah Border Terminal with Egypt.

The Miles of Smiles 2 aid convoy made it into the Gaza Strip in August 2010, after being stranded at the Egyptian side of the Rafah Border Terminal for 25 days.

The first Miles of Smiles convoy entered the Gaza Strip in 2009.

Despite Israeli claims of easing the siege on Gaza, medical supplies and medications are still scarce. Israel continues to impose restrictions on hundreds of items, including construction materials.