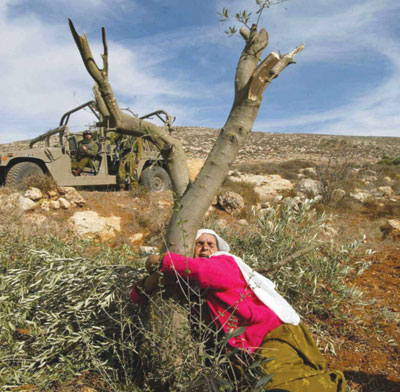 A group of extremist Israeli settlers uprooted on Thursday morning, at least 200 olive trees that belong to residents of Qasra village, south of the northern West Bank city of Nablus.Shortly after midnight, a group of Israeli settlers invaded the village and vanadalized the orchard, eyewitnesses reported.

Ghassan Douglas, in charge of the settlements file at the Palestinian Authority in the northern part of the West Bank, reported that the orchard in question is located south of the village.

Douglas demanded the international community to intervene and put an end to the serious and dangerous escalation carried out by fundamentalist armed Israeli setters as part of their â€œPrice Tagâ€ campaign.

The Price Tag campaign does not only aim at attacking the Palestinians in the West Bank and East Jerusalem, but also extends against Arab areas in the 1948 territories (Israel).

The attack is the latest among a serious of attacks targeting farmlands, mosques and homes in the occupied territories.

Last Sunday night, extremists burnt a mosque at the entrance of Toba Zanghriyya village in the Galilee, and wrote â€œPrice Tagâ€ and â€œRevengeâ€ on its walls, the Arabs48 news website reported.

On September 5th, a group of extremist Israeli settlers broke into a mosque in Qasra village, near the northern West Bank city of Nablus, and torched it after destroying its property and writing anti-Arab slogans on its walls.

Earlier in June this year, settlers of the Alei Ayin illegal outpost torched a mosque in Al-Mughayyir village, near the central West Bank city of Ramallah, after burning tires and throwing them in the mosque causing serious damages.