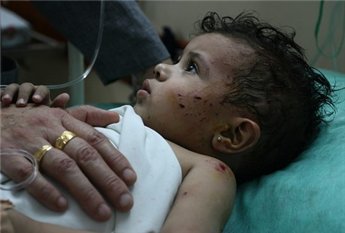 Former Netherlands Prime Minister, Andries van Agt, said that the health sector is extremely miserable in the Gaza Strip, stressing the need to end Gazansâ€™ sufferance, the Palestinian Maan News Agency reported on Wednesday afternoon. â€œIt is clear that the health sector is extremely terribleâ€ the premier said during a visit to the Dar â€“Ash-Shifa Hospital accompanied by the Minister of Health in Gaza, Basem Naâ€™im, confirming that he would take action in his country and the European Union to break Israelâ€™s blockade on the Gaza Strip.

â€œThe crisis of medicine and medical material are still flow, which expose most health services to be shut,â€ Naâ€™im said, adding that â€œmore than 500 patients were died due the shortage of medical services and Israelâ€™s siege on Gaza.â€

He further pointed out that the crisis of electricity shortage in hospitals and medical facilities for more than 8-10 hours a day threatens the lives of patients in the biological departments.

In addition, Mr. Naâ€™im received a Palestinian delegate of the Palestinian community in Germany, headed by Mr. Nader As-Saqa, in coordination with Palestinian civil institutions.

Mr. Naâ€™im explained the severe suffering that the Israeli blockade has been causing on Gazaâ€™s people everyday since more than 5 years. He also discussed the crisis of the shortage of electricity, medical devices shortage as well as the disability of patients to travel abroad.

It is worth mentioning that Hamas-headed government is controlling the Gaza Strip since June 2006 after an internal strife triggered out between Hamas and Fatah affiliates in the enclave. Therefore, Hamas government broke up with the P.A in Ramallah, the political capital of the Palestinian Authority.

Moreover, a national unity agreement has been signed between Fatah and Hamas few months ago which is mediated by Egypt, but no steps has been implemented on the ground so far.

In 2006, the Palestinian legislative elections were made and the Hamas Movement won about 80 seats out of 132 seats while the Fatah Movement won about 52 seats. Internal conflict has been made as the two parties did not agree on the portfolios of the cabinet.

After months of political conflict, Hamas affiliates in the Gaza Strip allegedly killed, and arrested a plenty of the Fatah affiliates alongside burning, damaging the P.A property and institutions in Gaza.

The Hamas Movement claims that many of whom killed were working for Israel as spies and they are involving in assassinating several of the Hamas and Al-Qassam Brigades, the armed wing of the Hamas Movement, leaders and militants. A charge which the P.A and PLO Fatah officials refused and they accused Hamas of defaming the Palestinian Cause.

Despite that fact that Fatah and Hamas movements signed the national reconciliation in Egypt, they still are fighting on some portfolios and the designated name of the head of the national government.