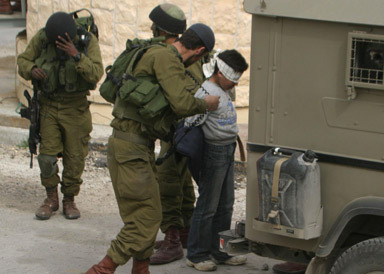 A gag order was lifted Wednesday in the case of a 13-year-old Palestinian boy who was recently acquitted of charges of throwing stones at an Israeli bus, after an Israeli judge questioned the interrogation tactics used by police while holding the child in custody.The boy was abducted in 2009 and accused of throwing stones at an Israeli bus, a charge which he denied. According to transcripts of the intense interrogation of the boy, the interpreter who spoke to him in Arabic gave widely differing interpretations of the interrogator’s questions and statements, sometimes even contradicting the Hebrew.

The boy was never told that he had the right to remain silent. Instead, the interpreter told him, ‘Everything that [the interrogator] asks you, answer her.’

When the boy continued to maintain his innocence, the interpreter repeatedly called him a liar, then said, ‘You’re going to stay in jail and we’ll teach you … Don’t make me hit you.’

Although the child himself was acquitted (two years after his arrest), no charges or reprimands have been brought against the interrogators or interpreter.

A recent report by Defence for Children International found that none of the ten recommendations made by the group two years ago about detention of children have been carried out by Israeli authorities. These recommendations include ending the interrogation of minors without a parent or lawyer present, ending the detention of children in the same facilities as adults, and investigating dozens of allegations of torture of children by Israeli police and military.

There are currently 251 Palestinian children detained by Israel, all of whom are being held in adult prisons and prison camps.