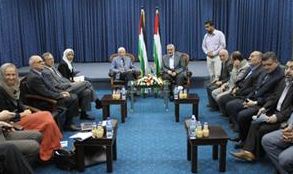 Prime Minister of the Hamas-led government in Gaza, Ismail Haniyya, met with the Netherlands Prime Minister, Andries van Agt, and a number of former ministers, ambassadors, and officials. Haniyya informed the visiting officials on the effects of the deadly Israeli siege on Gaza and the ongoing Israeli violations and attacks against the Palestinian people in Gaza, the West Bank and in Jerusalem, and also the dire situation of the Palestinian refugees who are internally and externally displaced.

Haniyya also stressed on the steadfastness of the Palestinians in their lands, and also informed the visiting officials on the open-ended hunger strike declared by all political prisons in Israeli prisons ten days ago.

The Palestinian official thanked the visiting officials for coming to Gaza, for expressing solidarity with the Palestinian people, and for rejecting the illegal Israeli siege.

Haniyya also told the visiting officials that Israel is still holding captive 21 elected Palestinian legislators and officials, including legislator Ahmad Attoun, who was recently kidnapped by the army in front of the Red Cross headquarters in Jerusalem.

He said that the health situation is extremely terrible in the Gaza Strip due to the Israeli siege that led to the lack of basic medical supplies and equipment.

On his part, Mr. Naim said that more than 500 patients died in Gaza due to the shortage of medical supplies and after being prevented from leaving the Gaza Strip for medical treatment abroad.