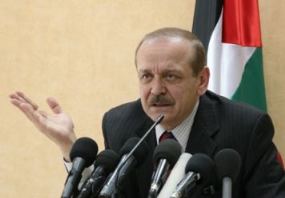 Secretary-General of the Executive Committee of the Palestinian Liberation Organization (PLO), Yasser Abed-Rabbo, stated that the Palestinian leadership will not return to the negotiations table before Israel halts all of its settlement activities.He also stated that peace talks must have a clear timetable, and cannot be conducted while Israeli continues its invasions and violations.

Commenting on some reports that claimed that Israel and the Palestinian Authority will be resuming talks soon, Abed-Rabbo said that the demands set by President Mahmoud Abbas are clear, and that peace talks will not be resumed before Israel abides by them.

The Palestinian position is coherent with the Quartet statement as it clearly demands Israel to halt its settlement construction and expansion activities in the occupied territories, including in and around occupied East Jerusalem.

During an interview with the Israeli Radio on Thursday, Israeli Defense Minister, Ehud Barak, said that peace talks between Israel and the Palestinians will be resumed soon, and will be based on the Quartetâ€™s proposal.

He added that the Quartetâ€™s proposal only aims at resuming talks, and that it managed to remove all â€œpreconditions for the resumption of negotiationsâ€.

In an interview with Reshet Bet Radio (Israeli Radio Channel 2), Barak stated that establishing a Palestinian state is in the interest of Israel, adding that Israeli officials are well aware that the lack of a peace deal with the Palestinians is causing Israel considerable condemnations around the world.

But, the Israeli government is ongoing with its violations and recently announced a plan to build 1100 new residential units for Jewish settlers in the Gilo settlement, in occupied Jerusalem.