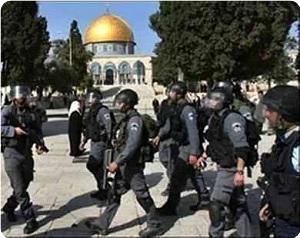 Israeli army personnel are preventing East Jerusalem and Israeli Palestinian residents under the age of 45 from entering the old city of Jerusalem and praying in AL-Aqsa mosque, Palestine News & Info Agency reported on Friday.According to the Israeli police, these measures were taken in connection with celebration of the Jewish holiday ‘Yom Kippur,’ which begins Thursday evening and ends Saturday midnight. It is expected that thousands of Israeli settlers from Jerusalem and the West Bank will arrive at the so-called â€œWailing Wall,â€ or the â€œWestern Wail,â€ for praying .

Israeli authorities intensified their presence, sending many military jeeps and police vehicles throughout the city of Jerusalem.

Israeli police and army forces have erected many military blockades and checkpoints at the entrances to and inside the old city of Jerusalem to obstruct the movement of the Muslim worshippers, in addition to the police and military presence at the outside gates of the al-Aqsa Mosque.

The Israeli military has also closed all the streets alongside the walls of the Old City and the entrances to some of the villages near al-Aqsa Mosque. The army has held provocative patrols in the cityâ€™s streets as well as stopping East Jerusalem residents at the main checkpoints at the entrances to the city, causing big traffic jams.

Palestinian leaders have called upon the East Jerusalem residents to stay at the al-Aqsa Mosque on Friday and Saturday to prevent any Israeli settlersâ€™ attempt to break into the mosque.