Army Demolishes A House In Bethlehem 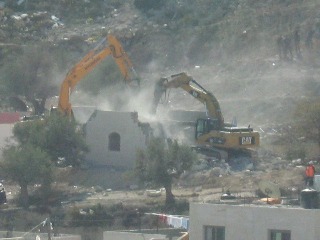 Israeli military bulldozers demolished a house in the village of Al-Jab’a, southwest of the West Bank city of Bethlehem, on Monday morning, the Palestine News and Info Agency (WAFA) reported.Head of the village council, Ahmad Hamdan, reported that a large number of military jeeps and personnel carriers, accompanied by military bulldozers, invaded the village after enforcing a strict closure on it.

The army then proceeded to the Al-Madares (Schools) neighborhood and demolished the house of resident Nasr Ed-Deen Al-Toos.

Hamdan also stated that the army did not withdraw from the village after demolishing the home, but deployed its soldiers in its streets and neighborhoods.

It is worth mentioning that Nasr Ed-Deen Al-Toos had only recently built his 120- square-meter home and was getting ready to move into it.

Al Jabâ€™a village has been subject to repeated Israeli violations, escalating in recent years as the army has confiscated large areas of the villagers’ farmlands and olive orchards in order to construct Jewish-only settlements and the Annexation Wall.