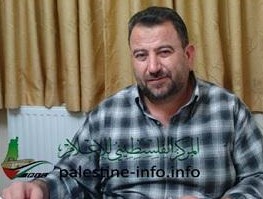 Former political prisoner, Saleh Al-Aroury, in charge of the Detainee File at the Hamas Movement, stated that the Egyptian mediated prisoner-swap deal reached with Israel, â€œalso includes the implementation of all demands set by the detainees held by Israelâ€.Al-Aroury told The Al-Quds TV station on Wednesday evening that part of the deal includes implementing the demands of the Palestinian detainees, who have previously executed repeated hunger strikes to achieve their goals. They have now been on a hunger strike for more than two weeks.

Al-Aroury, who was among the Hamas team negotiating the swap deal, stated that â€œnot a single detainee will remain in solitary confinement, families will be able to visit their interned loved ones, and all of their problems, God willing, will be resolvedâ€, the Hamas-affiliated Palestinian Information Center, reported.

The prisoners held by Israel started an escalated hunger strike two weeks ago, to protest the ongoing violations and attacks against them, and their families, when they were actually able to visit them.

Al-Aroury said that the first phase of the swap will be conducted Tuesday or Wednesday of next week, and confirmed that Israel will hand over the freed men and women to the Red Cross and Egyptian authorities, while at the same time captured soldier Gilad Shalit, will be transferred to the Sinai Peninsula.

He also stated that â€œit is unfortunate that a number of senior resistance leaders will not be releasedâ€, but added, â€œit is not possible for a single deal to achieve the release of everyoneâ€.

The Hamas official claimed that there are around 5700 Palestinians currently held by Israel.