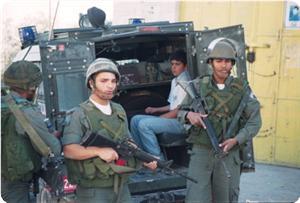 The Israeli army arrested three residents from the village of Beit Ummar, in the northern part of the West bank city of Hebron on Thursday morning, breaking into their houses and causing damage to the furniture, the Palestinian news agency, Maâ€™an, reported.Mohammad Awad, media spokesperson of the popular committee in the village, reported that a large force of Israeli soldiers invaded the village at dawn, and searched several houses.

The arrested Palestinians were identified as Yousef Khaleel, an official in charge of the Detainees File, Mohammad Bahar, and Ahmad Slebi, aged forty, seventeen and sixteen respectively. All were transferred to an unconfirmed destination.

Simultaneously, the army also took three youth from Qabatia village, in the southern part of the West Bank city of Jenin. The army invaded Qabatia village on Thursday morning and broke into a number of Palestinian houses in the western and eastern neighborhoods of the village, forcing their residents out.