PCHR: Blockade Must Be Lifted After Swap Deal Is Concluded 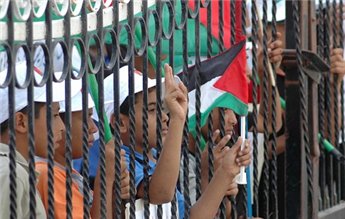 The Palestinian Center for Human Right (PCHR) confirmed Thursday morning that once the prisoners swap deal is concluded, the Israeli blockade on the Gaza Strip must be removed, adding that the collective punishment Gazans are undergoing must be ended as well. The PCHR stated that the blockade on the Gaza started after the Palestinian resistance captured Israeli soldier Gilad Shalit. on June 25, 2006. Since then, the Israeli military has tightened its restrictions on Gaza terminals, hindering the movement of the residents and the import/export of goods.

Israel’s collective punishment against the Palestinian people in the enclave has caused devastating effects involving all areas of Palestinian civiliansâ€™ lives in the Strip, the human rights center stated.

The PCHR welcomed the swap deal signed by the Hamas Movement and Israel, which ensures the release of 1027 Palestinian prisoners in exchange for the release of the one Israeli soldier.

It also praised the mediation role of Egypt in the deal in facilitating indirect negotiations between Hamas and Israel.

‘The center looks forward to reinforcing the Egyptian role in implementing the Palestinian national reconciliation between Hamas and Fatah movements, signed on May 4th, 2011 in Cairo.’

In addition, the center raised concerns over the forced exile of 203 prisoners included in the swap deal. 40 will be forced into exile, and 163 will be deported to the Gaza Strip. The PCHR said that the deportation violates .international law.

â€œThere are still more than 5000 Palestinian prisoners in the Israeli jails, including 400 from the Gaza Strip,â€ the statement reads, â€œThose detainees are undergoing ongoing violations and tough living conditionsâ€

The PCHR urges the international community to exert pressure on the Israeli government for the release of the Palestinian prisoners held by Israel..

The organization also calls on Israel to stop assaults carried out by the Israeli Prison Administration and prison guards, and to act in accordance with international law and Article 33 of the Fourth Geneva Convention, which concerns protection of the civilian opulation and the rights of detainees.