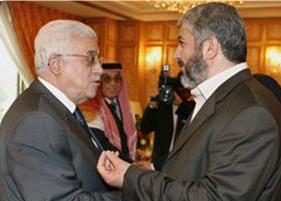 A senior source within the Hamas movement reported that arrangements are being made to secure a meeting between Palestinian President, Mahmoud Abbas, and Hamas Political Bureau head, Khaled Mashal.The source, who elected to remain anonymous, told the Hamas-affiliated Palestinian Information Center, that contact between Fateh and Hamas is ongoing to determine the time and location of the meeting that is to take place after Israel implements the first phase of the prisoner-swap deal next week.

The source also stated that the Abbas-Mashal meeting will discuss several key issues, topped by implementing the agenda of the Reconciliation Agreement that was signed between the two movements in Cairo in May, earlier this year.

After the prisoner-swap deal was reached between Hamas and Israel, Mashal phoned Abbas and informed him on its details.

The deal would secure the release of prisoner-of-war, Israeli corporal Gilad Shalit, in exchange for the release of 1,027 Palestinian political prisoners, who will be release on two phases.

The second phase of the swap will secure the release of 550 detainees and will be carried out in two months time. Forty detainees will be exiled outside Palestine, although the destination still remains unclear.

Shalit was captured by three Palestinian resistance groups in June 2006. Two soldiers and two fighters were killed when they attacked an Israeli military base in a cross border strike into Israel.

The military has carried out several military operations and wars against Gaza since then, but has never able to free Shalit or even get close to knowing his whereabouts in the besieged coastal enclave.

Shalit is the only Israeli prisoner currently in Palestinian hands, and latest statistics revealed that there are currently 5554 Palestinians imprisoned by Israel.

This prisoner-swap is the first deal ever to be held between Israel and the Palestinian resistance, but Israel has completed similar swaps with the Lebanon-based Hezbollah party.