Protest To Be Held In Nazareth In Support Of Striking Detainees 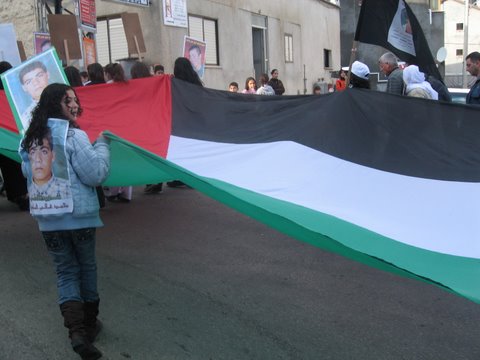 Thousands will gather for a popular protest in Nazareth to express solidarity with the Palestinian political prisoners held in dozens of Israeli prisons and detention centres across the country. The demonstration will take place on Friday at 5 PM, at the Al â€˜Ein Square in the city.â€œBetter to go hungry than to live on your knees,â€ is the slogan of those striking within the Protest Tent set up in Nazareth. They are expressing their solidarity with the Palestinian political prisoners, whose hunger strike has lasted for more than two weeks now.

Responding to a call by the Higher Follow-up Committee for The Arab Citizens of Israel, the striking protesters issued a statement on Thursday, calling on all political and social groups, along with national figures and residents alike, to participate in the protest. They wish to make the Al â€˜Ein tent an umbrella for everybody and a forum for solidarity with all detainees.

â€œThe empty bowls stand for [the hunger strike] conducted by thousands of detainees in Israeli prisons to express resistance to the ongoing violations and attacks, which is the most urgent issue at hand,’ the Nazareth group’s statement reads. â€œThe detaineesâ€™ issue has national and social dimensions. As much as we are proud of the detainees and their strong will, we also fear for their lives and we must support them.â€

The statement further asserted that before this strike started, â€œIsrael has already been engaged in racist and dangerous policies, and discriminatory legislation against the Arabs. They target our lands and our homes. With fundamentalism dangerously spreading throughout the country, our duty is to give youth the chance to play a central role in protecting our society.â€

Several Arab areas and towns, including those in occupied East Jerusalem, face repeated home demolitions and continuous attempts to evict residents from their land.

More than 5000 Palestinians are still imprisoned by Israel, including dozens who are from different Arab countries. More than 800 detainees have been sentenced to at last one life term.

Since the outbreak of the Al-Aqsa Intifada on September 28, 2000, the Israeli army has arrested or detained over 70.000 Palestinians, including around 8000 children and 850 women. Four of the women were pregnant when taken, and delivered their children whilst shackled to clinic beds inside Israeli prisons.