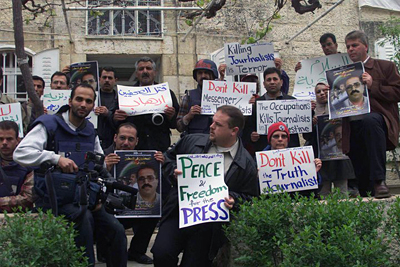 The Palestinian Center for Development and Media Freedoms (MADA) launched two campaigns in early August demanding an end to attacks on press freedom by Israeli forces and Palestinian security services.

How effective the campaigns will be in Palestineâ€™s restricted media freedom environment, and how they will help freedom of expression translate into reality remains to be seen.

The initiative was prompted after MADA and other media organisations started observing a deterioration in press freedom in Palestine.

Riham Abu Aita, MADAâ€™s Public Relations Officer, points to two reports published by MADA on violations committed by Israeli forces and Palestinian security services over the past three and a half years against journalists and media outlets in Palestine. The most frequent types of violations range from arrests, detentions, various forms of physical aggression, intimidation, prevention from coverage and censorship.

The reports revealed that, while Israeli forces are responsible for the majority of incidents, Palestinian internal political divisions still negatively affect the quality of Palestinian media.

So far, campaign activities have included distributing the two reports through MADAâ€™s mailing list, writing to newspapers, calling on authorities to respect press freedom and on journalists to denounce violations.

Palestinian media organisations welcomed the campaigns as a renewed call to halt all violations and uphold freedom of expression.

Walid Batrawi, Deputy Director of Internews in Palestine, regards MADAâ€™s initiative as an important instrument to raise awareness among Palestinian journalists, the international community, and the Palestinian authorities. He sees them as part of the continuous work to be done to put pressure on authorities and ensure the maximum freedom of expression for the Palestinian media.

As members of the International Freedom of Expression Exchange (IFEX), MADA and the Palestinian Journalist Syndicate are able to connect with key human rights and democracy organisations and ask them to intervene against violations. â€œAs an international coalition of civil society, human rights and media institutions, IFEX enables to raise the attention on Palestinian media, report violations and promote freedom of expression in Palestine,â€ MADAâ€™s press officer Abu Aita explains.

Deputy Director of Internews Batrawi notes that only a handful of Palestinian media institutions, among which MADA, the Palestinian Journalist Syndicate and the Palestinian Commission for Civil Rights, are involved in monitoring and reporting attacks on press freedom by Palestinian security services. They are also active in lobbying with government officials and human rights organisations and raising awareness among journalists and media outlets on their right to freedom of expression. â€œThis can be done by explaining the law and providing legal assistance for journalists,â€ Badrawi says.

Concrete actions can vary from issuing statements to Palestinian authorities urging them to stop violations, demanding investigation into specific cases, appealing through media outlets for the release of detained journalists and holding public demonstrations.

According to Badrawi, the main problem on the ground is caused by the fact that Palestinian security forces are unclear about how to deal with the media. â€œWe are trying to tackle this by urging officials not only to solve the problems after they occur, but also to instruct their security apparatus to respect freedom of expression,â€ Batrawi says.

â€œâ€˜The most effective approach is to be with the people on the ground, visit the decision-makers, organise face-to-face meetings, round tables, workshops,â€ adds Thawabteh from Birzeit Universityâ€™s MDC.

For CMNâ€™s General Manager Kuttab, more legal actions are needed, such as taking violators to court, as well as more public protests. â€œOur work has the best chance to be effective if it is applied without any restrictions to all violations of press freedom, irrespective of who is perpetrating the violationsâ€, he argues.

With regards to violations committed by Israeli forces, MADAâ€™s press officer Abu Aita says that Palestine needs help from the international community. She believes that Palestinians alone cannot reduce or pre-empt Israeli abuses, it is only through international support that the Israeli government can be made accountable.

In her view, reporting on violations and raising awareness play a crucial role in helping reduce attacks on press freedom. This encompasses communicating with Palestinian security services, encouraging journalists to write without restraint, but also promoting freedom of expression in Palestinian society.

Similarly, Batrawi supports a multi-level approach: â€œOne has to work with the relevant authorities and raise awareness in the community. It is also important to boost confidence among journalists and raise their skills to enable them to talk about these social issues with no limitations but according to professional standards.â€™

â€œThere are journalists who report within â€œred linesâ€ and thus resort to self-censorship,â€ Batrawi points out. â€œThis is much more dangerous than any censorship imposed by the government.â€

â€œWe tell journalists that their professional behaviour is a guarantee for their protection: â€˜If you do your work in a professional manner, whoever wants to violate your rights would be encountered by your professional standards. But if, on the contrary, you have wrong facts anything would take you to prisonâ€™â€, Batrawi explains.

For some, the effectiveness of the press freedom campaigns can also be improved through increased public manifestations and participation.

Thawabteh suggests involving universities and Kuttab pleads for larger public visibility. â€œWe need to have a much more robust and continuous action that includes street signs, musical events and other public performances. Also we need to sign up celebrities and politicians to take a stand on press freedom,â€™ Kuttab recommends.

Another important step, Batrawi states, is to work with the Palestinian Authority on two new laws, one regulating the audio-visual sector and the other establishing the Higher Media Council, which will provide a legal basis to guarantee more freedom of expression.

Between June 2010 and May 2011, she lived in Palestine, where she made her first steps as a freelance journalist. During that time, she reported on news events, conducting interviews and writing feature stories.

She also contributed as English radio newscaster to Voice of An-Najah (An-Najah University). Her articles have appeared in Palestinian newswires such as the PNN, IMEMC, and The Palestine Telegraph.

Now based in London, she is establishing herself as a regular freelance journalist. Her interests include Palestine, the Middle East, independent journalism, peace, human rights, and international travel.