Israel Starts Moving Detainees In Preparation For Their Release 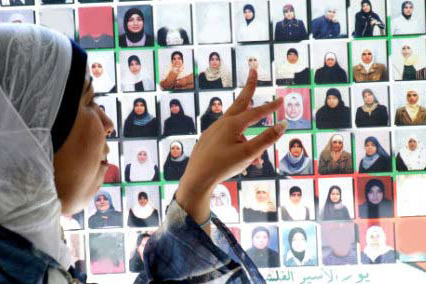 Israeliâ€™s Yedioth Aharonoth reported on Sunday that Israel has already begun implementing its part of the prisoner-swap deal. Pison officers started moving detainees, who are included in the deal, to Keiziot detention camp and Ha-Sharon prison, in order to release them within forty-eight hours.The paper said that female detainees were also moved from the Al-Damoun Prison, in the north of the country, to the Ha-Sharon Prison under tight security measures, with the Israeli army closing all roads leading to Ha-Sharon.

The Palestinian Ministry of Detainees reported that there are nine female detainees who are not included in the prisoner-swap deal.

The statement of the Ministry contradicts those made by a number of Hamas leaders, who have claimed that all female detainees will be released.

Three of the nine detainees are from the 1948 territories; one of them was arrested in 2006 and sentenced to seventeen years imprisonment. She was identified as Lina Jarbouni.

Dozens of Arab residents of Daliat Al Karmel and Esifia, in the north, gathered on the sides of the streets chanting for freedom as the buses passed by.

The Ynet also reported that buses loaded with dozens of male detainees, drove to the Ketziot Prison while under heavy guard. The detainees were chanting for freedom, and further victories.

The first phase of the swap will lead to the release of 477 detainees. Israel has published a list containing their names.

By law, Israelis have forty-eight hours to file appeals against the release of any detainees, but the Israeli Supreme Court is unlikely to uphold any appeals, in an attempt to avoid delays in implementing the deal. Prisoner-swap deals are normally reached after years of internationally mediated talks, and numerous guarantees from various countries. Israel will not want the deal derailed at the final hurdle by appeals launched with the courts.

A poll conducted by Israel’s TV, Channel 10, revealed that two-thirds of the Israelis approve of the prisoner-swap deal that was mediated between the Hamas movement and Israel.

This is the first swap deal to be held between Israel and the Palestinian resistance, whilst Israel has conducted several prisoner-swap deals with the Lebanon-based Hizbollah party.

Shalit was captured by three Gaza-based resistance groups on June 25th, 2006. Two soldiers and two fighters were killed when Palestinian fighters raided an Israeli military base in a cross border attack, and abducted Shalit.

The attack was carried out by the Al-Qassam Brigades, the armed wing of Hamas, the Popular Resistance Committees, and the Army of Islam.

Despite all Israeli attempts, including invasions and wars on Gaza, and even leaflets dropped by Israeli drones all over the Gaza Strip â€œofferingâ€ millions of Shekels (the Israeli currency which is imposed on the Palestinians) to anyone who can provide viable information, Israel was never able to locate Shalit.

Some reports claims Israel might have had an idea about his location, but did not attempt to free him, fearing for his life; such reports were never confirmed by Israel or any other party. Even the political leadership of Hamas did not know his location, with only a few senior fighters within the three groups knew his exact location.

The Palestinian Centre for Human Rights (PCHR) reported recently that there are more than 5000 Palestinian detainees currently held in Israeli jails, including some 400 prisoners from the Gaza Strip.