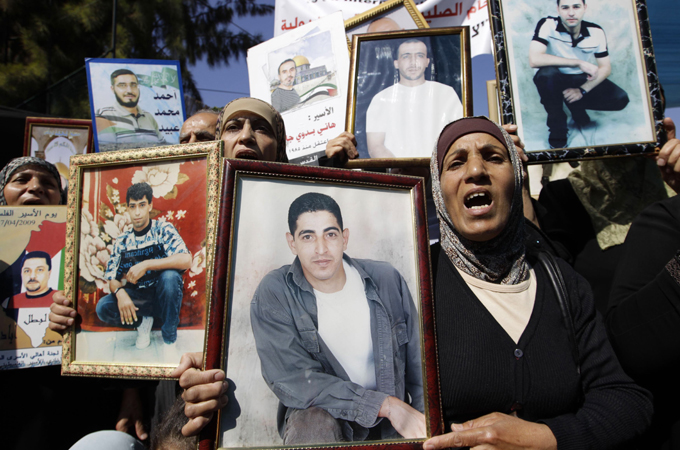 The Israeli government has published a list of four-hundred and seventy-seven Palestinian prisoners who are to be released in the first stage of the swap, in exchange for captured Israeli soldier, Gilad Shalit.The list, released on Sunday by Israel’s justice ministry, includes the names of the four-hundred and fifty Palestinian men, and twenty-seven women, who are to be freed during the first phase of the deal.

According to the list, most prisoners will return to their homes in the illegally occupied West Bank or the Gaza Strip.

But some are categorized as being released under a ‘security arrangement’, or are to be ‘relocated’ to the other Palestinian territory or even exiled abroad. The Israeli document does not indicate to which countries or areas these prisoners would be deported. In the past, Israeli authorities have illegally transferred prisoners to Gaza (from the West Bank) and various European countries — a practice condemned by international law.

This past Friday, a Hamas-affiliated website had published a list of prisoners who are to be released in the deal.

In comparing that list to what was released on Sunday, many Gazans expressed surprise at the extent to which Hamas had conceded to Israel, Al-Jazeera’s Nicole Johnston reported.

‘We were told by some senior members of Hamas that they expected six senior [officials] – sort of top brass – from the al-Qassam Brigades, the group’s military wing, to be returned to Gaza,’ Johnston said.

‘But as it turned out, they’ve managed to negotiate for one of these top figures – Yihia al-Sinwar, one of the founding members of the Qassam brigades.’

Shimon Peres, the Israeli president, has received the files of the hundreds of prisoners and has forty-eight hours to sign the pardons to officiate the release, a presidential spokeswoman said.

On Tuesday, the day of the exchange, prisoners will be transported to various military checkpoints between Israel and the Palestinian territories.

Those ordered for deportation abroad will be sent to Egypt, the transit point from which they will carry on to their final point of destination.

The 48-hour gap in releasing the list of names on Sunday, and the freeing of the prisoners themselves on Tuesday, is a move by Israeli officials to give the Israeli public a chance to lodge any legal appeals against the deal, which will see the return of Gilad Shalit, who has spent more than five years in captivity.

Relatives of victims of Palestinian attacks are planning to hold protests demanding the cancellation or at least a delay of the deal, Al-Jazeera’s Cal Perry reported.

‘Certainly within the next 48 hours you’re going to see these protests outside the court in Jerusalem by the families as we approach the release,’ he said.

Shalit, 25, was captured in 2006 in a Hamas-led cross-border raid. His location remains a mystery, although he is believed to have been held in the Gaza Strip.

The last video evidence that Shalit was still alive was in 2009.