Al-Zahar: We Will Release Shalit When The Ex-detainees Reach The West Bank And Egypt 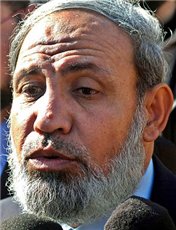 The leading figure of Hamas, Dr. Mahmoud Al-Zahar, stated that the moment the ex-detainees enter the West Bank and the Egyptian territories, Hamas will immediately release Gilad Shalit, the Maâ€™an News agency reportedAl-Zahar explained the mechanism of implementing the swap in the first phase which is supposed to be implemented on Tuesday. He reported â€œThe released detainees will be gathered in two sites; the first will be close to the West Bank and the second will be close to Egypt. Then, they will be handed over to the authority of the Red Cross. Finally, at the time when the detainees enter the Egyptian territories and the West Bank, the Israeli soldier, Shalit, will be released.â€

As for the second phase, he stated in a speech to the Agency of the Middle East that â€œHamas will not participate in determining the names of the released detainees, in the deal which will include 550, and will be implemented in two months time.â€ He stated that â€œIsrael is the one who will choose the names of those to be released.â€ However, he asked that the deal should include those detainees who have long been in prison, and have little time left to be released, in addition to elders and those who have chronic diseases.

Asked about the possibility of carrying out the assassination of Israel and the prosecution the right of the top leaders released, al-Zahar said that the implementation mechanism of the exchange transaction to ensure the safety of these prisoners.

Al-Zahar also guaranteed the safety of the leading figures, who Israel stated they might prosecute and assassinate them after their release.

He also denied Hamasâ€™ responsibility of accelerating the implementation of the deal and stated, â€œWe made several demands and got a large percentage of them. As for the names of leaders, we demanded 50 names and 40 were accepted. He added, â€œSome of the most prominent names that were rejected are Abdullah Barghouthi, Marwan Abbas, Hasan Salameh and Ahmad Saadat.’

As for the Egyptian role in the deal, Al-Zahar reported â€œEgypt is a partner and a primary sponsor in all phases of negotiation’, and he revealed that Egypt was the first to receive a request from Hamas about a deal a few days after the capture of Shalit in 2006. Nevertheless, when Egypt noticed the lack of seriousness of Israel in negotiations, it withdrew from the proposal immediately. However, they tried again in 2009, but Israel did not respond, and thus Egypt withdrew from the negotiations once again. Finally, the deal has now been accomplished, and Al-Zahar confirmed the strong presence of Egypt in all phases of the deal, from the very beginning until the very end.