All Freed Detainees Are Now In Gaza And Ramallah 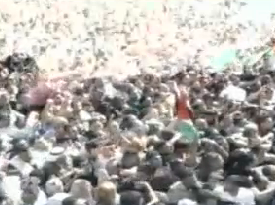 Every Palestinian detainee released in the first phase of the prisoners-swap deal between Israel and the Hamas movement, except those sent to Egypt, are now safely in Gaza and Ramallah. This article includes the speeches of President Mahmoud Abbas in Ramallah, and Hamas leader, Hasan Yousef, standing next to him.The Palestinian Authority in Ramallah, headed by President Mahmoud Abbas, held a conference to welcome the detainees back, and expressed to them that they ‘are freedom fighters: for God and the country.”

Abbas said that he hopes that all detainees in Israeli prisons will be freed, and will be able to return home.

The President further stated that the suffering and steadfastness of the detainees will never be wasted.

“You sacrificed, you struggled, and you will see the outcome of this struggle: a Palestinian state with East Jerusalem as its capital,” Abbas said, “Your case was always our main focus around the world, we will continue to act for the release of all detainees.”

“God willing, we will soon see brother Marwan Barghouthi, brother Ahmad Saadat, Ibrahim Hamed, Abbas Al Sayyid, and every other detainee coming back home,” Abbas stated, and also wished speedy recovery for Ahmad Saadat, after his health condition deteriorates as he and the rest of the detainees continue their hunger-strike. Saadat is the secretary-general of the Popular Front for the Liberation of Palestine.

He also thanked Egypt for its role in the deal, and in the reconciliation agreement between Fateh and Hamas, adding that this deal was initiated by the detainees in Israeli jails, “who acted for the unity of their people.”

“Brothers and sisters, we are acting to achieve an independent state with East Jerusalem as its capital. The future state will be in the 1967 borders, and Israel must stop all of its settlement activities and violations,” Abbas said, “I won’t be telling a secret when I say that there is an agreement between us and Israel for the release of more detainees after this deal is concluded, therefore, we are asking them [Israel] to abide by their vows, if they give weight to their own promises.’

“We are building the institutions of our future state, we have strong institutions, not found in other countries”, the president continued. “Brothers and sisters, your family and friends, wherever they are, are happy for you, for your release, but, let me say, that we owe all of this, after God, to all of the martyrs who have sacrificed themselves for our country”.

Standing next to Abbas, Hamas leader Hasan Yousef, stated in his speech which followed Abbas’, that, “as much as we are happy for the release of the detainees, we are also in pain, because we still have brothers and sisters in Israeli jails,” and added that the Palestinian people will always act for the release of all detainees.

Yousef further stated that the Palestinian people have the capabilities to act for the release of all detainees, and that this prisoner-swap deal is a proof that resistance is an effective measure, to be conducted side-by-side with other venues of resistance and politics.

“Mr. President, we all came here to your home, representing all factions and segments of our society, to affirm our unity; we have no choice but to unite,” he started, “Mr. President, we all stand together, united, to counter the illegal Israeli policies that deny our legitimate rights. We want to thank Egypt, for its important local and regional role, and we want to thank every side that helped in achieving this deal. We want to thank The President and all Arab countries, we are all brothers, and we must send a special thank you to our people in the Gaza Strip”.

Thousands then started to chant: “With our soul and blood we sacrifice for Palestine,” and Yousef chanted with them.

In Gaza, Ismail Haniyya of Hamas, and several political and military leaders of the movement and other factions, welcomed the detainees who were sent to Gaza, and affirmed that the resistance fights for the liberation of its people, and has achieved victories.

Meanwhile, Cairo declared a state of emergency at the Cairo International Airport, as 40 of the released detainees will be flown out to Turkey, Qatar and Syria, as Israel stipulated in their release agreement.

It is worth mentioning that clashes were reported at the Betunia terminal leading to Ramallah, after the Israeli army closed the terminal when thousands of residents gathered there to welcome the detainees home.

The army used waste-water cannons and tear gas, to force the residents away, just after they removed the Red Cross from the scene.

There are approximately 5000 detainees who are still imprisoned by Israel; dozens of whom have been imprisoned for twenty years or more.