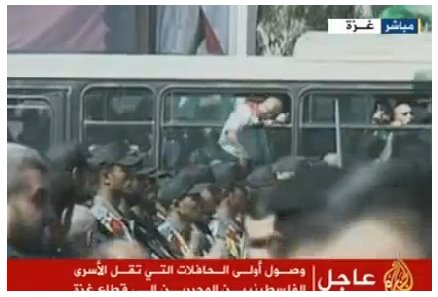 Egyptian TV has published an interview with released Israeli soldier, Gilad Shalit, after he was safely handed over to Egypt as part of the prisoner-swap deal.In his interview, Shalit said that he was informed of his impending release only one week ago.

The soldier added that he would like to tell people about his years in captivity.

He further stated that Egypt’s good relationship with the Hamas movement in Gaza, and the Israeli government, played an important role in the success of the deal.

When asked about what lessons he had learnt during his years of captivity, Shalit said that the most important lesson that could be learnt is that ‘achieving a prisoner-swap deal in a short time is…’ and he stopped there. He seemed to be in good health, but seemed slightly overwhelmed.

When reminded about the thousands of Palestinians held by Israel for so many years, while he was held for five years, the interviewer asked directly: ‘Is it possible that you would lead a campaign to release all Palestinian detainees who are still in captivity?’

When asked about his plans for the future, Shalit expressed that he hoped this deal will help bolster the peace between Israel and Palestine.

Waleed Al Omary, head of the Al Jazeera TV office in Palestine, said that Shalit will first undergo a check-up, before being airlifted to a military base, where Israeli officials and his family will be waiting for him. Afterwards, he will be flown to a military base in Tel Aviv, before he finally heads back home.

Al Omary added that several buses and vehicles have transported the freed Palestinian detainees to border terminals, and that all 477 released detainees are either with the Red Cross, or with the Palestinians and Egyptians.

Officials of Hamas, the Al Qassam brigades, and various other factions and armed groups, welcomed the freed men and women, after the first bus carrying them entered the Gaza Strip.

The Hamas movement stated that any of the West Bank detainees who will not yet be allowed back home, will be staying in Gaza until such a time that they are finally allowed to return.

Clashes were reported at the Betunia terminal leading to Ramallah, after the Israeli army closed the checkpoint when thousands of residents, along with families of those released, gathered there to welcome the detainee’s home.

The army said that nobody will be allowed to greet the detainees at the terminal, before forcing the Red Cross out of the area and proceeded to attack those who had gathered to welcome the freed men and women.

The army used waste-water cannons and fired tear gas to force the residents away, stating that the freed West Bank detainees will be sent to the Palestinian Authority headquarters in Ramallah, to be welcomed by President Mahmoud Abbas and other senior officials.

A total of ninety-six West Bank detainee men, and twenty-one women, arrived in Ramallah for the official ceremony. Sixteen detainees originally from Jerusalem were returned home there.

The first phase of the swap-deal includes the release of 477 Palestinian detainees, but the Palestinian Centre for Human Rights (PCHR) reported recently that there are still more than 5000 Palestinian prisoners currently held in Israeli jails, including some 400 from the Gaza Strip.

Army Abducts Two Palestinians, Summons One For Interrogation, In Hebron