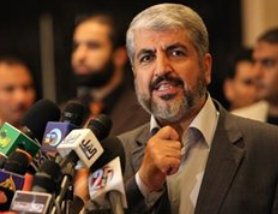 Khaled Mashal, head of the Hamas Movement’s political Bureau in Damascus, called on President Mahmoud Abbas on Tuesday, to hold a meeting with Hamas in Cairo next week. The object of such a meet is to conclude all outstanding issues, which are delaying the full implementation of the Palestinian reconciliation agreement.His statements came as he met the 40 freed Palestinian detainees who were sent to Cairo first, before being forwarded on to three host countries- Israel asserted this stipulation into the prisoner-exchange agreement, forcing the 40 into exile.

The Hamas leader said that the proposed meeting would discuss the progress of the unity agreement between Fateh and Hamas, and would also review the path of negotiations with Israel, especially amidst the current deadlock.

Hamas is not part of the negotiations with Israel, but wants to ensure Palestinian delegates remain steadfast on the legitimate demands of full liberation and independence of the Palestinian people.

Mashal said that the Palestinians must learn from the way the negotiations were heading, in order to ensure they do not divert from their path, and do not allow Israel more chances to manipulate the peace process.

‘Anyone who heads to the negotiation table without a proper base is like a fighter who goes to battle without his weapon,’ Mashal stated. ‘Resistance has taught us a valuable lesson; the enemy only bows to pressure, and does not compromise unless he has to.’

The captured soldier, who fell in the hands of the resistance in Gaza in June 2006, was sent to Egypt, before being handed over to the Israelis by Egyptian security forces.