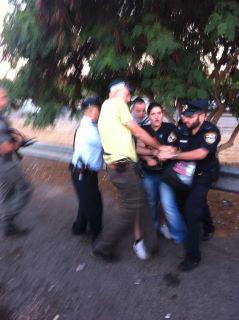 On Thursday, the Israeli Police violently attacked dozens of protesters who had assembled peacefully in front of Ha-Sharon Israeli prison, near Netanya. They demanded the release of the remaining nine female detainees who were not included in the prisoner-swap deal. The police arrested fifteen residents, taking them to nearby police stations.The Arabs48 news website reported that the protest was organized by the Hurriyat (Freedom) Society and a group of activist youth.

The protesters expressed solidarity with all Palestinian detainees, and with Ahmad Saadat, the imprisoned Secretary-General of the Popular Front for the Liberation of Palestine (PFLP) who has suffered a sharp deterioration in his health, following more than twenty days of a hunger strike.

The Arabs48 reported that the police resorted to an excessive use of force against the peaceful protesters, and kidnapped at least fifteen men and women, including several Jewish activists.