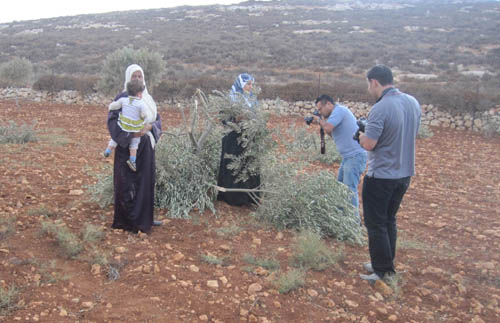 Israeli soldiers abducted 3 Palestinian civilians, including a child, at various checkpoints in the West Bank.

Israel has continued to impose a total closure and has isolated the Gaza Strip from the outside world for over three years. The illegal Israeli-imposed closure of the Gaza Strip, which has steadily tightened since June 2007, has had a disastrous impact on the humanitarian and economic situation in the Gaza Strip.

Israel has continued its settlement activities in the OPT in violation of international humanitarian law, and Israeli settlers have continued to attack Palestinian civilians and property.

On the same day, Israeli settlers gathered at the gates of al-Ibrahimiya and al-Faihaa’ schools to the southwest of the Ibrahimi Mosque in Hebron. The administrations of the two schools were forced to let schoolchildren go homes in order to ensure their safety.

On the same day, Israeli settlers attacked Cordoba Elementary School in the center of Hebron. They threw stones and empty bottles at the school and attempted to break into it. When teachers intervened to prevent the settlers from breaking into the school, the settlers violently beat them. Israeli forces were present in the area, but did not intervene to stop the attack.

On 14 October 2011, a number of Israeli settlers from “Gilad” settlement stormed Palestinian agricultural areas. The settlers, escorted by 3 Israeli soldiers, threw stones at Palestinian farmers while they were cropping olives. Later, other Israeli soldiers came to the area and evacuated the family, claiming that they exceeded the time allocated for cultivation of olives.

On 19 October 2011, a number of Israeli settlers from “Nevi Enhiniah” settlement, which stands on the lands of Eskaka village, east of Salfit, attacked Palestinian farmers while cropping olives in al-Bayada area. They stole their agricultural tools and the cultivated olives.

During the reporting period, Israeli forces used force against peaceful demonstrations organized by Palestinian civilians and international and Israeli human rights defenders in protest to the construction of the Wall and settlement activities in the West Bank. As a result, dozens of Palestinian civilians, including a photojournalist, and human rights defenders suffered from tear gas inhalation and others sustained bruises.

Following the Friday Prayer on 14 October 2011, dozens of Palestinian civilians and international and Israeli human rights defenders organized a peaceful demonstration in Bil’ein village, west of Ramallah, in protest to the construction of the annexation wall. They raised the Palestinian flag and portraits of Marwan al-Barghouthi and Ahmed Sa’adat, Members of the Palestinian Legislative Council who have been detained by Israeli forces. They then moved towards areas of Palestinian land, which the Israeli High Court ordered to be returned to their Palestinian owners. When they reached (Abu Lemon) nature preserve, the demonstrators walked along the wall and released the balloons and kites. The demonstrators also used megaphones to call on Israeli settlers living in “Mitityaho Mizrach” settlement to leave it. Israeli soldiers stationed in the area fired rubber-coated metal bullets, sound bombs and tear gas canisters at the demonstrators. As a result, a number of demonstrators suffered from tear gas inhalation, and fire broke out in a number of farms.

Also following the Friday Prayer on 14 October 2011, dozens of Palestinian civilians and international and human rights defenders organized a peaceful demonstration in Ne’lin village, west of Ramallah, in protest against the construction of the annexation wall. They chanted slogans calling for Palestinian reconciliation, adherence to the Palestinian inalienable rights and resistance of the occupation. Additionally, they chanted ‘194 is the State of Palestine’ and other slogans against the American President and his speech at the United Nations that was defended the Israeli occupation. They clashed with Israeli troops positioned near the annexation wall. Israeli soldiers fired rubber-coated metal bullets, sound bombs and tear gas canisters at demonstrators. As a result, a number of demonstrators suffered from tear gas inhalation.

Also following the Friday Prayer on 14 October 2011, dozens of Palestinian civilians and international and Israeli human rights defenders organized a peaceful demonstration in Nabi Saleh village, northwest of Ramallah, in protest against land confiscations and settlement activities. They raised the Palestinian flag, chanted slogans against the USA, called for ending the occupation and chanted ‘194 is the State of Palestine’. When the demonstrators attempted to reach areas of land seized by Israeli settlers near ‘Halmish’ settlement, Israeli soldiers fired rubber-coated metal bullets, sound bombs and tear gas canisters at them. As a result, one person was hit by a tear gas canister to the abdomen. A number of demonstrators also suffered from tear gas inhalation and other sustained bruises.

Due to the number and severity of Israeli human rights violations this week, the PCHR made several recommendations to the international community. Among these were a recommendation that international civil society, including human rights organizations, bar associations, unions and NGOs, continue their role in pressuring their governments to secure Israel’s respect for human rights in the Occupied Palestinian Territories and demand Israel end its attacks on Palestinian civilians.

The PCHR calls upon the international community to pressure Israel to lift the severe restrictions imposed by the Israeli government and its occupation forces on access for international organizations to the Occupied Palestinian Territories.