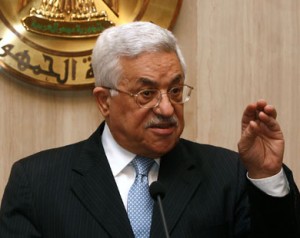 Abbas said that Olmert released detainees on two occasions as a gesture of good will in order to advance peace talks, and that when he asked him to release more detainees Olmert reportedly said that “Such a release can only happen when Shalit is freed.’
According to the report, Olmert told Abbas that once the Shalit deal is concluded, and the soldier is returned home safe, he will release detainees who are not considered “dangerous”.

Abbas told the Times that he discussed the issue earlier this week with the U.S. administration, adding that U.S. Envoy, David Hale, and the U.S. Consul General for Jerusalem, Daniel Rubinstein, told him six months ago that President Obama will make sure that Netanyahu grants Abbas confidence building measures, Israeli Ynet News reported.

Abbas reportedly asked about what kind of measures the U.S. is intending, and Rubinstein said the they would include easing the siege on Gaza, removing West Bank roadblocks, and releasing Palestinian detainees.

Abbas initially rejected the Israeli offer, fearing that Israel would use it to waste time during negotiations by just discussing this issue.

The U.S. envoys then returned to the region two or three times and met with Abbas, asking him to accept the offer, telling him that “it is free’ and that ‘he doesn’t have to do anything.’ But after he accepted the offer, it was never implemented, the Ynet reported.

The Palestinian President does not believe that Netanyahu will respect the offer of Olmert, adding that he will contact him in the coming days to ask him if he would fulfill it.

“I will not argue with him, or hold any negotiations. He can either fulfill Olmert’s promise or reject it,’ Abbas added. “If he doesn’t believe me, he only needs to turn to meeting minutes; it is all written there by his colleagues.’

There were 477 Palestinian detainees released this week as part of the Prisoner-swap deal that secured the return of captured Israeli soldier, Gilad Shalit, to his family. Israel will be releasing 550 more detainees as part of its obligations in the second phase of the deal.

Mahmoud Abbas and his Fatah movement, the rival of Hamas, had nothing to do with the case of Shalit, or the indirect talks that eventually led to the deal.

The Ministry of Detainees in Gaza reported said that the number of detainees imprisoned since before the Oslo peace agreement of 1993 has dropped from 299 to 126. The list of long-serving detainees (who have been imprisoned for twenty or more years) has dropped, after the swap-deal, from 145 to 51 detainees. This includes twelve from the 1948 territories, four from Jerusalem, seven from the Gaza Strip, and 28 from the West Bank.

There are 280 children who are still imprisoned by Israel in violation of International Law. Israel is also holding captive five residents from the Gaza Strip, dubbing them as “Illegitimate combatants”. None of them were part of the swap.