Israel To Question Shalit On His Account Of The Events 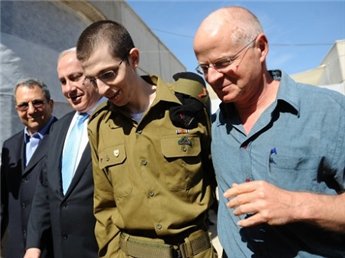 According to Maariv Israeli Paper, newspaper, the Israeli Army and Intelligence Services are awaiting the release of Shalit’s medical report, on October 21, before they can question him about his capture, circumstances he faced in captivity, and whether he provided his captors any vital information about the army.Maariv added that the army will grain Shalit some time to rest, until he is fully rested and recovered, and after he spends some time with his family.

The team questioning Shalit will include officers from the Army and the Security Services, in addition to a private military psychiatrist.

The army decided to include the psychiatrist to determine any possible psychological effects such as being anti-social or suffer Post-Traumatic Stress Disorder (PTSD), which may accordingly prevent him from revealing the full truth of what he faced during his captivity.

Although the army is persistent to question Shalit, there is a strong belief that he does not have any intelligence information of any value. This is because his captors kept him in a state of complete isolation. However, he may still be able to provide his investigators some background about his daily routine in captivity.

Furthermore, Israeli military sources said that they don’t think that Shalit has any information of real value, as the resistance changes its methods and tactics based on the situation on the ground.