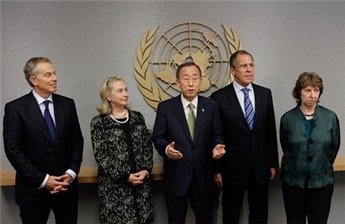 The international Quartet delegates will be traveling to Ramallah and Jerusalem later this week in an attempt to revive the stalled Palestinian-Israeli peace talks, the Palestinian News Agency, Maan, reported earlier on Sunday. The envoy will be holding a meeting in Jerusalem with senior members of the Israeli government, including; the Israeli Prime Minister, Benjamin Netanyahu; the Defense Minister Ehud Barrack; and Minister of Foreign Affairs, Avigdor Lieberman. Later on, the delegates will be holding a meeting in Ramallah with the Palestinian President, Mahmoud Abbas.

Israeli sources have stated that Israel is ready to re-start negotiations with the Palestinians, but the latter must stick to restricted conditions in order to revive these negotiations.

Israel further said it is ready to discuss the Palestinian demands, but it does not promise the Palestinians that they will accept their conditions to resume stalled negotiations.

It is worth mentioning that the Quartet offered a plan to re-start the Palestinian-Israeli peace talks last month. The Palestinians responded that the only way to resume peace talks is under the following conditions; that Israel totally halts its settlement construction activities, fully withdraws Israeli troops from the occupied territories, and recognizes a Palestinian state based on the 1967 borders with East Jerusalem as its capital.