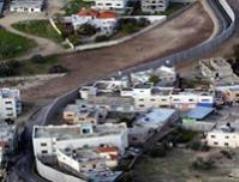 On Saturday, a funeral procession in the Palestinian village of Dhaher al-Malih received a violent response from Israeli soldiers stationed at a gate in the Annexation Wall. Several soldiers fired toward the mourners, injuring four- including three sons of the deceased.According to local sources, the mourners were heading from the town of Dhaher al-Malih, which is completely encircled by the Israeli Annexation Wall, to a cemetery in the village of Tura, requiring them to cross through two gates in the wall.

Although the villagers had applied for and received permission from the Israeli authorities to pass through the gates on Saturday, when they arrived, the soldiers present refused to allow them to pass as a group.

An Israeli army spokesperson told reporters from the Ma’an News Agency, ‘They approached the soldiers in a manner that made the troops nervous, so in line with army protocol, the soldiers fired into the air, lightly injuring two Palestinians, who did not need treatment.”

But eyewitnesses countered that the group was not at all threatening, and was simply a funeral procession bearing the body of Fathi al-Khatib for burial in his family’s cemetery – which it itself has been separated from the village by the Israeli wall.

Also, eyewitnesses reported that four Palestinians were injured (not two, as the Israeli military claimed), and were treated by medics on the scene. The four injured were identified as sons of the deceased; Abdullah, Muhammad, and Mustapha al-Khatib, along with a fourth man, Ahmad Qabha.

No soldiers have received disciplinary action for the attack, and no citations will be issued. The Israeli Army claims that the soldiers acted within military protocol.