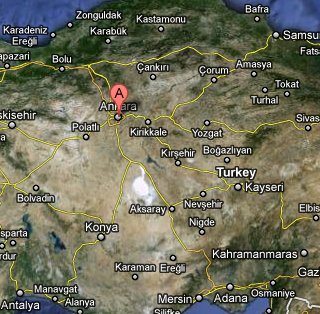 The Turkish government rejected on Sunday an Israeli offer to help with the rescue efforts, after Turkey was hit with a 7.2 magnitude quake, followed by a second measuring 6.1. An estimated 138 people were killed, and more than 350 injured. The rescue operation continues, with hundreds more missing and feared dead.The Israeli Defense Minister, Ehud Barak, told Israeli TV’s Channel 10, that “He has the impression that the Turks do not want Israel’s help.”

“Their current response to our offer remains negative,” Barak said. “Should they reconsider, at any given time, we will still be willing and ready to help.”

An official at the Turkish Foreign Ministry stated that the country’s response to the Israeli offer is similar to its reply to a dozen offers from various countries.

Whilst rescue operations continue, Turkish officials said that a thousand people or more are feared to have been killed in the earthquake.

Furthermore, Israeli President Shimon Peres, phoned his Turkish counterpart, Abullah Gul, also offering help and expressing Israel’s condolences to the families of the victims; the conversation is the first since Gul expelled the Israeli ambassador from Ankara on September 2nd.

This was due to Tel Aviv refusing to apologize for its deadly attack on the Freedom Flotilla which headed to Gaza on May 31 of last year. The flotilla was attempting to deliver humanitarian supplies to the costal enclave, and break the blockade; nine Turkish activists were killed.

The expulsion of the Israeli ambassador came shortly after the United Nations issued a report stating that Israeli commandos who attacked the Turkish ship used excessive force.