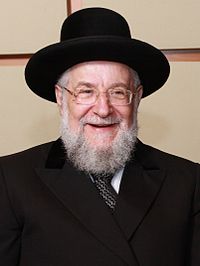 Israeli Ynet News has reported that students of the Ohel Shem High School, in Ramat Gan, claim that Rabbi Yisrael Meir Lau, who recently spoke at their school, preached that “Marrying gentiles plays in the hands of the Nazis.”The Rabbi, head of the Yad Vashem (Israel’s official memorial to the Jewish victims of the Holocaust), uttered his comments during a lecture on the Holocaust, and his personal memories of what he witnessed at the Buchenwald concentration camp. The students listening to the Rabbi had only just come back from a trip to Poland.

The Ynet said that the remarks of the Rabbi pushed a number of 12th grade students to leave the auditorium, whilst some students considered their act disrespectful to the Rabbi.

A student told the Ynet that the remarks of the Rabbi were made towards the end of his lecture. “His remarks made me angry. Once he said them I walked out,” the student said.

The student further stated that the Rabbi included verses from the Psalms, and that Lau claimed that they described the Holocaust before it took place, and that the Nazis did not only try to destroy the Jewish people, but Judaism itself.

“He also declared that ‘Jews who walk away from religion are destroying Judaism,’” the student added, according to the Ynet report.

Another student also said that Rabbi stated that Jews should not assimilate, and that had Jews not assimilated within the U.S., “There would be more than 30 million Jews in America.”

“His remarks showed contempt to the Jews who assimilated,” the student said, “It’s like he regarded them as inferior to others.”

But some were angered by the those who protested to the statements of the Rabbi; a 12th grader said that the students “Showed disrespect to this honorable man.”

The Ynet also reported that the office of the Rabbi issued a statement, claiming that “He did not see any student leave during the lecture,” adding that “The number of Jews in the world is declining. Not because they are immigrating to Israel, but due to assimilation and intermarriages.”