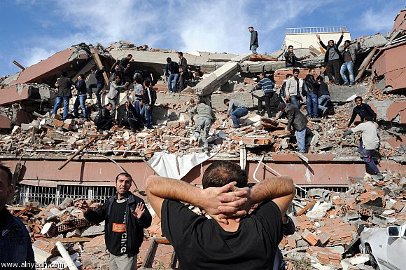 An official at the Turkish Foreign Ministry stated Tuesday that Ankara requested tents and mobile homes from more than 30 countries, including Israel. The request came after Turkey was hit Sunday by a 7.2 magnitude quake, followed by a second measuring 6.1. An estimated 456 people were killed and hundreds were injured.The Turkish-Israeli relations witnessed a sharp deterioration after Israeli commandos attacked the MV Marmara solidarity ship, part of the Freedom Flotilla, that was heading to deliver aid to the Gaza Strip last year, and killed nine Turkish activists.

The Turkish official told Reuters that “Turkey asked all countries that offered help, including Israel, to send equipment and supplies such as mobile homes, tents and containers”.

Initially, after the quake hit Turkey on Sunday, Israel offered help but Ankara rejected the offer due to the strained relations between the two countries.

Last time Turkey was hit by an earthquake Israel sent equipment and rescue teams. In December last year, Turkey sent planes used in extinguishing wildfires to help Israel in countering fires that led to the death of 41 persons.

Israeli Radio reported that Tel Aviv will be flying a plane to Turkey, on Wednesday, loaded with tents and mobile homes to provide shelters for the displaced residents in the city of Van, hardly hit by the earthquake.

The Palestinian Ma’an News Agency reported that Israel’s acting ambassador in Ankara, Nizar Amer, contacted the Turkish Authorities to inquire about urgently needed supplies so that Tel Aviv can send them.

In 1999, two earthquakes, both with magnitudes of more than 7, struck northwestern Turkey leading to the death of about 18,000 persons.