P.A. Demands The Release Of 550 Detainees 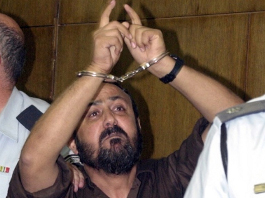 Israeli daily, Haaretz, reported that, according to senior Palestinian officials, the Palestinian Authority (P.A.) in the West Bank will be asking the Quartet Committee to pressure Israel into releasing 550 detainees, to fulfill vows made by former Israeli Prime Minister Ehud Olmert to President Mahmoud Abbas.Last week, President Mahmoud Abbas told the Times weekly that, in 2008, Olmert vowed that, after Gilad Shalit is released from captivity, Israel will release an additional 550 detainees not included in the deal as an act of good will to ensure the resumption of peace talks. The Arabs48 news website reported that Olmert confirmed the report.

According to Haaretz, both Israel and the P.A. accepted last month an initiative presented by the Quartet that includes setting a time-frame for direct Palestinian-Israeli talks that would arrive at a final solution by the end of 2012.

Chief Palestinian Negotiator, Dr. Saeb Erekat, told Haaretz on Monday that, during the Abbas-Olmert meeting that took place in September 2008 in Jerusalem, Olmert vowed to release Palestinian detainees after a swap-deal is reached with Hamas, and after Shalit safely returns home.

The Palestinian official added that the release of detainees, which is similar to the demand that Israel must halt its settlements activities, are not preconditions, but are about demands for Israel to fulfill its commitments.

Haaretz also quoted Israeli officials stating that Olmert vowed to release 550 detainees to boost Abbas’ position among the Palestinians due to a rising support for the rival Hamas movement.

The P.A. is focusing on 170 detainees who have been imprisoned by Israel prior to the Oslo peace deal with Israel, signed in 1993. It also wants to secure the release of Fatah strongman, Marwan Barghouthi, and PFLP Secretary-general Ahmad Saadat.

The prisoner-swap deal, mediated by Egypt between Israel and Hamas, includes the release of 180 detainees held by Israel prior to the signing of the Oslo peace agreement.

Haaretz reported that the P.A. repeatedly asked Israel to release those detainees. Despite continued rejection, Israel eventually surrendered to the demands of Hamas in order to secure the release of Gilad Shalit.