Israel To Demolish Bridge of the Historic Mughrabi Gate in Jerusalem 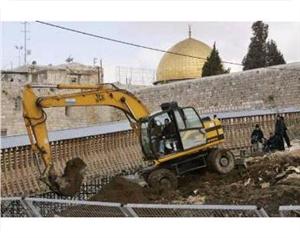 Gulf News has reported that the Jerusalem Municipality announced Tuesday that it will be demolishing the ramp of the historic al-Mughrabi Gate in occupied East Jerusalem within a month. The Gate leads to al-Buraq Wall in the compound of the al-Aqsa Mosque.The decision was made despite several objections by a number of Arab countries, especially Jordan.

Gulf News said that after demolishing the ramp, Israel intends to build a bigger bridge that allows military vehicles and trucks into the al-Aqsa Mosque area, and that the move is also meant to expand the area where Jewish worshipers pray at the Western Wall (al-Buraq Wall).

According to the report, the Jerusalem Municipality gave the project its final approval, and that the Municipality stated that the wooden bridge is not safe any more, and is considered a structural threat to the visitors and the tourists.

Israel contacted Jordan in this regard, but Amman and the Arab League rejected any changes to the historic area and filed a complaint to the UNESCO. The Jerusalem Municipality said that it will go ahead with its plan regardless of the Jordanian response.

Source in Jordan stated that Amman will only consider the Israeli plan if the proposed bridge is temporary, and that the permanent bridge can only be built by Jordan.

Palestinian sources in Jerusalem stated that the plan to demolish the bridge only aims at expanding a Jewish prayer area for women.

The Department of Waqf (religious endowment) told Agence France Presse on Tuesday that the area in question is under its jurisdiction as a holy site and not under Israel’s jurisdiction, and added that since the collapse of the al-Mughrabi ramp in 2004, it was responsible for its restoration.

The Islamic Movement in the 1948 territories had filed a petition with the Israeli High Court of Justice, which decided that the demolition and the reconstruction should not be aimed at expanding the praying area used by Jewish female worshipers, or expanding the al-Buraq area.

Israel tried to conduct renovations in the area four years ago, but had to stop the work following massive protests in Palestine and the Arab World as the protesters feared the construction would endanger the foundations of Islamic holy sites and structures.