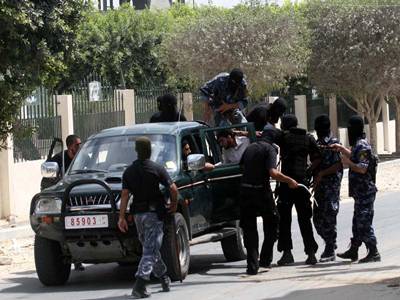 The Palestine News and Info Agency, WAFA, reported Thursday that the Hamas-run security forces arrested a reporter identified as Salah Abu Salah, 30, in Abasan Al Kabeera town, east of Khan Younis, in the southern part of the Gaza Strip.WAFA added that Abu Salah was arrested after receiving an order to head to a security center for questioning, but the security forces went ahead and arrested him from his home after confiscating his computer, some books and documents.

The Palestinian Journalists Syndicate issued a press release denouncing the arrest of Salah, and the confiscation of his private property.

The Syndicate added that the arrest of Salah is a direct violation to the freedom of press, and called for his immediate release.