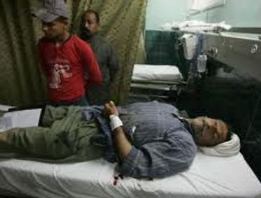 Palestinian medical sources reported that a shepherd was shot and injured, on Thursday evening, after an Israeli soldier based near the border with Rafah, in the southern part of the Gaza Strip, fired rounds of live ammunition at him. The shepherd, Mustafa Ermaylat, 32, was grazing his sheep, when the soldiers opened fire at him. He was moved to Abu Yousef Al Najjar hospital in Rafah suffering moderate wounds.

The soldier who opened fire at the shepherd was based at a monitoring tower of a military base, across the border, east of Rafah.

Earlier on Thursday, the Israeli Air Force bombarded four areas in the central and southern parts of the Gaza Strip; damage was reported, no injuries.

Dozens of Palestinians were killed, and wounded, after the Israeli army opened fire at them for approaching the border fence area in Gaza.

Some of them were shepherds and others were workers collecting gravel and scrap-metal for recycling.

Israel enforces a “no-man zone” across the border with Gaza; residents who enter the area are submit to military fire without a warning.