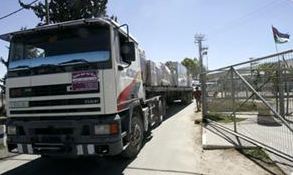 Palestinian sources in the Gaza Strip reported that a Russian convoy, loaded with medical supplies, arrived in the Gaza Strip, Thursday, via the Rafah Border Terminal, between Gaza and Egypt.The convoy, the first from Russia, embarked on its journey last Tuesday under the slogan “Russia Stands With You Gaza”. Several Russian reporters accompanied the convoy, the Palestinian Information Center reported.

The convoy was organized by the, Solidarity Association Foundation, an Islamic charitable society in Russia that collected, during the holy Muslim month of Ramadan, donations used to buy medical supplies and equipment from Egypt.

The purchased supplies were based on a list of urgently needed medications and supplies provided by the Palestinian Ministry of Health in Gaza.

Head of the Foundation, Lilia Mohammad Yarova, Journalist Maxim Shevchenko and his wife Nadezhda Kifrckova, known for their support to the Palestinian cause, accompanied the convoy among other activists.

Yarova stated that the Foundation, based in Moscow, “collected nearly $17.000 from Muslims all over Russia to buy medical supplies and medications urgently needed in Gaza due to the ongoing Israeli siege”.

Yarova added that “the suffering of the Palestinian people in Gaza poses as a challenge to all Muslims around the world, to prove their support and solidarity with our brothers, and with our humanity”.