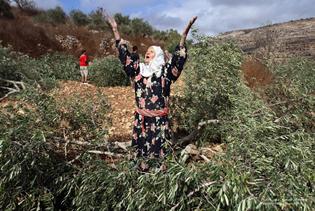 A group of armed Israeli settlers uprooted, on Thursday evening, twenty olive trees that belong to Palestinian residents of Beit Safafa town, south of occupied East Jerusalem. Dozens of trees were uprooted earlier on Thursday, near the central West Bank city of Ramallah.Local sources reported that the settlers placed a “Price Tag” leaflets after conducting their attack.

The “Price Tag” is a campaign by extremist settlers who carry repeated attacks against the Palestinians, their homes and lands, and are responsible for attacks targeting several holy sites.

Also on Thursday, settlers uprooted dozens of Olive trees near Al Jania village, west of the central West Bank city of Ramallah, and placed signs that read “The trees are now owned by Israel, do not approach”.

Settler attacks usually witness a sharp escalation during the Olive harvest season, and include the uprooting of Palestinian trees, in addition to attacks the residents, and international supporters, while picking their olive trees.

In a number of incidents, the settlers picked the Palestinian Olive trees and stole the produce.

Most Palestinian orchards and farmlands became isolated behind the Israeli Annexation Wall in the West Bank, an issue that forces the residents to apply for a permit from the Israeli army to enter their lands.

Such permissions are usually denied, and in some cases are granted late in the olive harvest season. The settlers, on the other hand, are on the Israeli-controlled side of the Wall and have direct access to the Palestinian orchards.