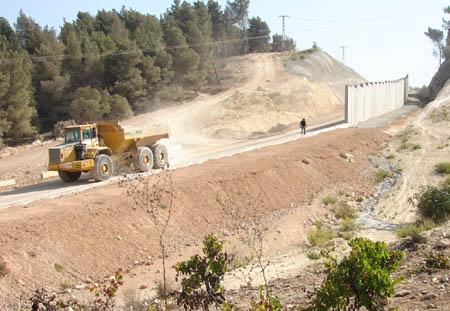 In its Weekly Report On Israeli Human Rights Violations in the Occupied Palestinian Territories for the week of 20 – 26 October 2011, the Palestinian Center for Human Rights found that Israeli forces conducted 58 incursions into Palestinian communities, abducting 13 and destroying Palestinian farmland for the ongoing construction of the Annexation Wall.Israeli attacks in the West Bank:

During the last week, Israeli forces continued to use force against peaceful protests in the West Bank. Dozens of Palestinian civilians and international human rights defenders suffered from tear gas inhalation.

In 58 separate incursions, Israeli forces abducted thirteen Palestinians. One of those abducted this week is an organizer in the non-violent campaign against the construction of the annexation wall in Bil’in village, west of Ramallah. 4 Palestinian civilians, including a child, were abducted at various checkpoints in the West Bank.

The Israeli Municipality of Jerusalem decided to demolish the bridge of Bab al-Maghariba neighborhood.

Also this week, Israeli forces closed offices of a number of NGOs and arrested a staff member.

During the last week, Israeli forces fired at Palestinian workers collecting scraps of construction materials in the northern Gaza Strip.

Israeli forces have continued to impose a total ban on the exportation of Gaza’s products, especially industrial products, leading to undermining any real chances to rerun economic establishments. The situation has been aggravated especially after making Karm Abu Salem crossing as Gaza sole commercial crossing and the repeated closure of this crossing which negatively affected the quantity of Gazan products which were allowed to be exported during last April.

Israeli forces have continued to prolong the implementation of their decision to allow 60 cars into Gaza weekly although more than 11 months have passed since they announced this decision after three years of ban imposed on the delivery of cars to Gaza. As a result, the prices of cars in Gaza have been on the rise and local markets experience serious shortage in spare parts.

According to field investigations conducted by PCHR, on 03 October 2011, Israeli forces started bulldozing activities in farms and uprooting of trees in targeted lands in Ein al-Hadafa area, Khellet al-Samak area and Ein Jweiza area in al-Walaja village. These bulldozing activities are aimed at preparing infrastructures for the construction of a new section of the annexation wall and for the establishment of a road along the annexation wall in the west and northwest of al-Walaja village. More than 90 agricultural dunums have been bulldozed since the beginning of the bulldozing activities. In addition, more than 230 olive trees, almond trees, grapevines, cypress trees and oak trees have been uprooted.

According to investigations conducted by PCHR, since 2009, the length of the parts of the annexation wall which have been constructed in the east, west and northeast of al-Walaja village has amounted to 4,500 meters, with widths ranging between 20 and 50 meters. As a result, 2,100 trees, including 1,000 olive, grape and almond trees, have been uprooted and 500 dunums of agricultural lands, forests and a part of a nature reserve have been destroyed. Besides, approximately 2,000 dunums in al-Walaja village have been isolated behind the wall.

The wall’s design plan published by the Israeli Ministry of Defense on its website on 30 April 2007 shows that the construction of the annexation wall would isolate al-Walaja village by surrounding it from the northern, eastern and western sides by the wall. From the south, the village will be enclosed by a security road controlled by Israeli forces and extending along bypass road no. 436, which is used by the residents of al-Walaja village to have access to services in Bethlehem. Once it is completed, the wall will isolate over 50% of the total area of the village.

During the reporting period, Israeli forces used force against peaceful demonstrations organized by Palestinian civilians and international and Israeli human rights defenders in protest to the construction of the Wall and settlement activities in the West Bank. As a result, dozens of Palestinian civilians, including a photojournalist, and human rights defenders suffered from tear gas inhalation and others sustained bruises.

Following the Friday Prayer on 21 October 2011, dozens of Palestinian civilians and international and Israeli human rights defenders organized a peaceful demonstration in Bil’ein village, west of Ramallah, in protest to the construction of the annexation wall. They raised the Palestinian flag and portraits of Marwan al-Barghouthi and Ahmed Sa’adat, Members of the Palestinian Legislative Council who have been detained by Israeli forces. They then moved towards areas of Palestinian land, which the Israeli High Court ordered to be returned to their Palestinian owners. Israeli soldiers stationed in the area fired rubber-coated metal bullets, sound bombs and tear gas canisters at the demonstrators. As a result, a number of demonstrators suffered from tear gas inhalation. Israeli forces also arrested Ashraf Ibrahim Abu Rahma, 30.

Also following the Friday Prayer on 21 October 2011, dozens of Palestinian civilians and international and human rights defenders organized a peaceful demonstration in Ne’lin village, west of Ramallah, in protest against the construction of the annexation wall. They chanted slogans calling for Palestinian reconciliation, adherence to the Palestinian inalienable rights and resistance of the occupation. Additionally, they chanted ‘194 is the State of Palestine’ and other slogans against the American President and his speech at the United Nations that was defended the Israeli occupation. They clashed with Israeli troops positioned near the annexation wall. Israeli soldiers fired rubber-coated metal bullets, sound bombs and tear gas canisters at demonstrators. As a result, a number of demonstrators suffered from tear gas inhalation.

At approximately 10:00 on Saturday, 22 October 2011, dozens of Palestinian civilians and international human rights defenders organized a peaceful demonstration in the center of Beit Ummar town, north of Hebron. They moved towards the agricultural lands Khillat al-Kutla area, which have been closed by Israeli forces, near “Karmi Tsur” settlement, south of the town. Israeli soldiers attacked the demonstrators and declared the area a closed military zone. They violently beat a number of demonstrators and fired tear gas canisters and sound bombs at them. As a result, a number of demonstrators suffered from tear gas inhalation.

On 24 October 2011, the website of the Israeli daily Yediot Aharanot unveiled an Israeli settlement plan in East Jerusalem. It reported that the Israeli government is preparing for establishing a new settlement neighborhood in the south of East Jerusalem near Beit Safafa village. The project will divided into 3 phases, which include the construction of 4,000 housing units. The Israeli Organization and Construction Committee has approved the first phase, which includes the construction of 2,610 housing units.

Israeli settlers attacked Palestinian farmers while harvesting olives in the West Bank. On 21 October 2011, a number of Israeli settlers, one of whom was armed with a machine gun, from “Yish Kodesh” settlement, southeast of Nablus, attacked a number of Palestinian farmers and international solidarity activists who were harvesting olives. The settlers used stones, sharp tools and sticks. As a result, two Palestinian civilians, including a child, were injured. Israeli forces arrived at the area and fired tear gas canisters at the farmer and solidarity activists. Dozens of farmers and solidarity activists suffered from tear gas inhalation and they were forced to leave the area.

On the same day, a number of Israeli settlers, escorted by Israeli forces, attacked Palestinian farmers and expelled them from their lands while they were cropping olives in Kufor Qaddoum village, northeast of Qalqilya, because of the weekly demonstration organized by villagers. Israeli soldiers stated to villagers through megaphones that they are banned from harvesting olives until they stop the weekly demonstrations. Israeli forces and settlers expelled the farmers from their lands.

On 22 October 2011, a number of Israeli settlers from “Rafafa” settlement attacked Palestinian agricultural lands in Qarawat Bani Hassan village, northwest of Salfit. They expelled a Palestinian family from their land while members of the family were harvesting olives.