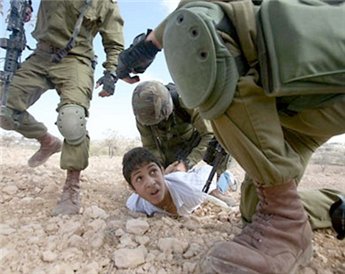 The Israeli military has invaded al-‘Asakreh village near the West Bank city of Bethlehem on Thursday. According to Palestinian news agency, Ma’an, the forces broke into several houses before abducting three children.The army has abducted Ahmad al-M’uti, 9 years old, Abd al-Rahman, 12, and Mu’taz ‘Asakreh, 13. All were transferred to an undisclosed location.

The families in the village attempted to prevent the forced removal of the children but the Israeli army dispersed those gathered by firing tear gas bombs and canisters at them.

Eyewitnesses reported that the soldiers were shouting at the children who were noticeably panicked during the raid.

The residents of the village condemned the detention of the children, who were taken under the pretext of throwing stones. The villagers asserted that the army took them while they were doing their homework.

They also issued an appeal to human rights organizations to urgently intervene to ensure the safe release of their children without any physical or psychological pain.

The soldiers usually patrol the village of al-‘Asakreh which leads to confrontation between them.

In related news, local sources reported that a child, Mohammad ‘Asakreh, 14 years old, was critically injured in the leg and the abdomen on Wednesday after a suspicious object, alleged to have been left by the Israeli army in the vicinity of the village, exploded following his discovery of it. He was transfered to a local hospital for treatment.