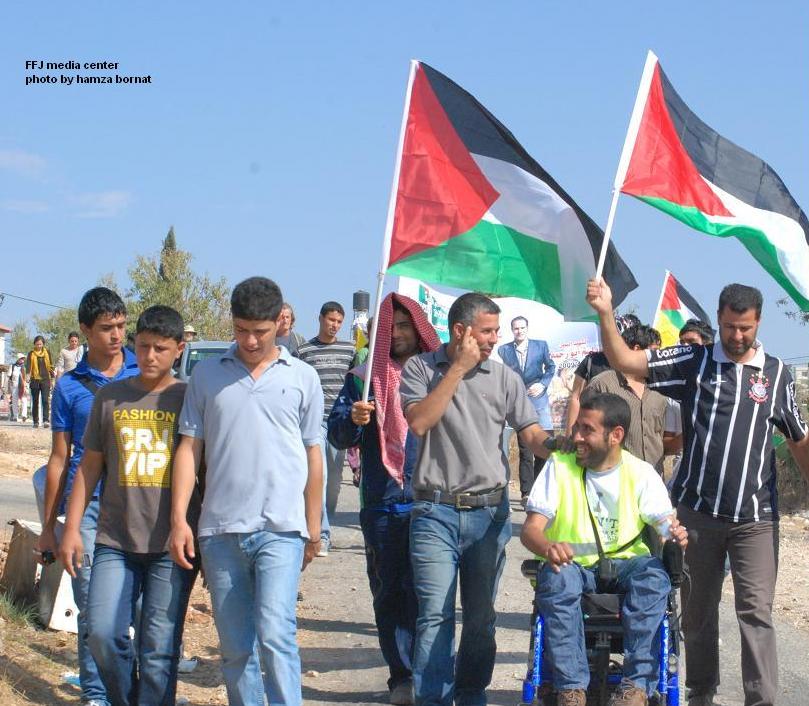 The Friends of Freedom and Justice in Bilin, near the central West Bank city of Ramallah, reported Friday that one resident was wounded, while dozens suffered the effects of teargas inhalation after the Israeli army attacked the weekly nonviolent protest against the illegal Israeli Annexation Wall and settlements. The protest started following Friday prayers in the village and headed towards Palestinian orchards that were recently reclaimed after years of legal battles in Israeli courts.

As the case every week, dozens Israeli and international peace activists participated in the protest, and marched with the residents chanting for the liberation of Palestine.

The protestors carried Palestinian flags and the pictures of Bassem Abu Rahma, and Jawaher Abu Rahma, who were killed by Israeli army fire in previous protests against the Annexation Wall, in Bil’in.

They chanted for Palestinian unity, steadfastness, demanded the liberation of all Palestinian detainees held by Israel, and called for the removal of the Annexation Wall built on Palestinian lands.

As the protestors arrived at the Abu Lemon Reserve, and after they managed to remove some barbed-wires and iron bars installed behind the Annexation Wall, soldiers on the other side of the Wall, started firing gas bombs and rubber-coated metal bullets.

One resident, identified as Issa Abu Rahma, was injured, while dozens were treated for the effects of tear-gas inhalation.

The attack led some local youths to hurl stones at Israeli soldiers stationed behind the Wall.

Also, the Popular Committee Against the Wall in Bil’in denounced the kidnapping of resident Ashraf Abu Rahma, who was taken prisoner by the army during last week’s nonviolent protest.

Three years ago, Ashraf was detained by Israeli troops in Nil’in village, near Ramallah, and after handcuffing and blindfolding him, soldiers had him stand near a military jeep, before on soldiers held one of his hand, and another soldiers stood, at extremely close range, and shot him in the leg.

The assault was caught on tape by Salaam, a 17-year-old girl from the village, and was sent to several human right groups, including the Israeli Center for Human Rights in the Occupied Territories, B’Tselem. Later on, the army kidnapped the father of the girl captured the attack on tape.