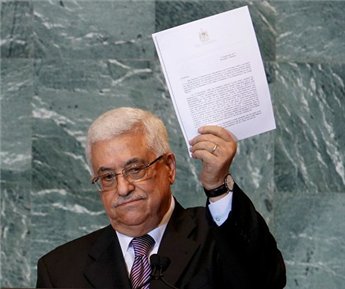 As part of its international campaign to isolate the Palestinian Authority and its statehood application, the Israeli government sent a letter to UN Secretary General, Ban Ki-moon, accusing Palestinian President, Mahmoud Abbas, of granting the Hamas movement a green light to fire shells into Israel.The note was submitted by Israel’s Ambassador to the UN, Ron Prosor, and falls as part of the Israeli diplomatic campaign against Abbas and his Authority for heading to the UN seeking full membership and a recognition of an independent Palestinian state, Palestinian officials stated..
.
Despite the fact that the note holds the Hamas movement, in Gaza, responsible “for rocket attacks against Israel”, it also held Abbas responsible for this escalation.
Israel recently stated that several shells were fired from the Gaza strip into a number of Israeli towns, including recent shells fired at Ashdod.