2 Fighters Killed In Gaza; 9 in Less Than 24 hours, One Israeli Killed In Asqalan 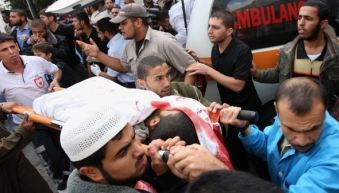 The Al Quds Brigades, the armed wing of the Islamic Jihad, reported on Sunday at dawn, that two of its fighters were killed in an Israeli Air Strike targeting an area west of Gaza City. On Saturday afternoon, seven fighters were killed in Tal Al Sultan, in southern Gaza. Several Palestinians were injured. One Israeli was killed by a Palestinian shell in Asqalan (Ashkelon).The Brigades stated that the most recent Israeli shelling led to the death of Suheil Jundiyya and Mardy Hajjaj. Its fighters then fired a barrage of Grad and Quds missiles, in addition to several mortar shells leading to the death of one Israeli in Ashkelon while several others were treated for shock; damage was reported.

Israeli Ynet News reported that the Israeli man, Moshe Ami, 56, was seriously injured by shrapnel of a shell fired into Ashkelon.

The Al Quds Brigades stated that the firing of mortars comes in retaliation to the Israeli escalation against Gaza that led to the deal of 9 of its fighters in less than 24 hours.

It added that in the first Israeli Air Strike, Saturday, the army killed Ahmad Al Sheikh Khalil, one of its engineers and a brother of four fighters who were also killed by the army in previous attacks, in addition to Hasan Al Khodary, Bassem Abu Al Ata, Mohammad Ashour, and Abdul-Karim Shatat.

The Third attack targeted an area west of Gaza city, leading to death of fighters Mardi Hajjaj, and Suheil Jundiyya, from Al Shijaeyya neighborhood in Gaza.

Several Resistance groups in the Gaza Strip, including the Popular Resistance Brigades, the Abu Ali Mustafa Brigades, Al Aqsa – Ayman Jouda Brigades, stated that the Israeli military escalation and the death of the nine fighters “requires all resistance groups to retaliate to the ongoing Israeli crimes”.

Seven Palestinians were killed, and five others were injured, in two Israeli drone attacks on Saturday afternoon that targeted a training center used by the Al-Quds Brigades, the armed wing of the Islamic Jihad, and a group of fighters gathered near the border with Israel. A Palestinian shell fired in retaliation killed one Israeli and wounded two.

The Israeli Air Force used unmanned drones to fire at least two missiles into a training center for the Al-Quds Brigades near Tal As-Sultan, in the south of the Gaza Strip; at least five fighters were killed in the attack. Two hours later, another drone missile fired at a group of Palestinian fighters killed two.

Medics arrived at the scene of the first attack and transferred the dead and the wounded to a local hospital, local sources reported.

The Al-Quds Brigades issued a statement confirming that one of its military training centers was bombarded, and leading to several casualties.

The Brigades said that Ahmad Al Sheikh Khalil, one of its main leaders specialized in explosives, was killed in the attack, and added that Khalil is the brother of four fighters who were previously killed by the Israeli army.

The Brigades vowed retaliation while its spokesman, Abu Ahmad, to the Hamas-affiliated Palestinian Information Center, that what happened is a serious Israeli escalation, and a crime that ‘cannot go unpunished’.

Within two hours, groups of fighters had mobilized to fire homemade shells across the border with Israel, one of which hit the city of Ashkelon, north of the Gaza Strip, killing one Israeli civilian and wounding two others.

The Israeli Air Force then launched another drone, targeting a group of fighters near the border which they claim were preparing to fire another homemade shell. The drone hit the group with a missile, killing two and bringing the total number of Palestinian casualties to seven.